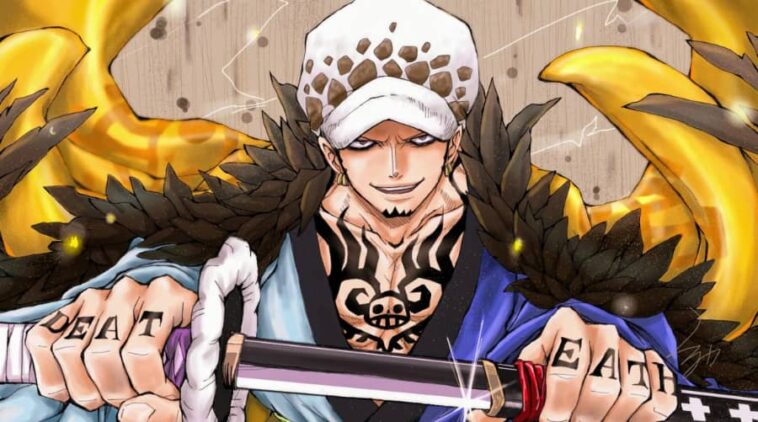 Trafalgar Law is one of the protagonists in One Piece. He takes a role as an ally for Straw Hat Pirates. Goes with the nickname Surgeon of Death, due to his ability in surgery.

His full name is Trafalgar D. Water Law, but he kept his identity as secret and goes by the name Trafalgar Law instead.

He is a slim tall man with a faint shadow under his eyes. He has black dark hair but mostly kept hid behind his white northern style fur hat with a spotted pattern in it.

He often wore a yellow hoodie with black sleeves and a black hood. His hoodie has Jolly Roger printed on the front.

He also wears jeans with odd dots on the knee and ankle, along with sport-pointed shoes. He has small earring in both of his ears.

Law is laid back and would smile calmly when he is not in a tense situation. He chooses to avoid unnecessary conflict and wait for valuable opportunities to gain his goal.

He hates being ordered around and can be childish and competitive at times, especially with Luffy and Kid.

“Who wants to get sliced up next…?”

“I’m an unparalleled surgeon. My operations always end in success…!”

“So that’s Straw Hat-Ya… He’s sloppy with his powers but suitably strong.”

“People call me the “Surgeon of Death”…”

“I’m an unparalleled surgeon. My operations always end in success…!”

“We won… But it’s nothing to get excited about.”

“Weaklings can’t choose how they die. You’d be wise to remember that.”

“I don’t plan to lose. I’ll fight until I’m the last one standing!”

Trafalgar Law is a calm but strategic one. In battle he was known for his cruelty and oddly merciful, for mutilating his opponents without harming their bodies, and for toying around with the body to mock his opponents.