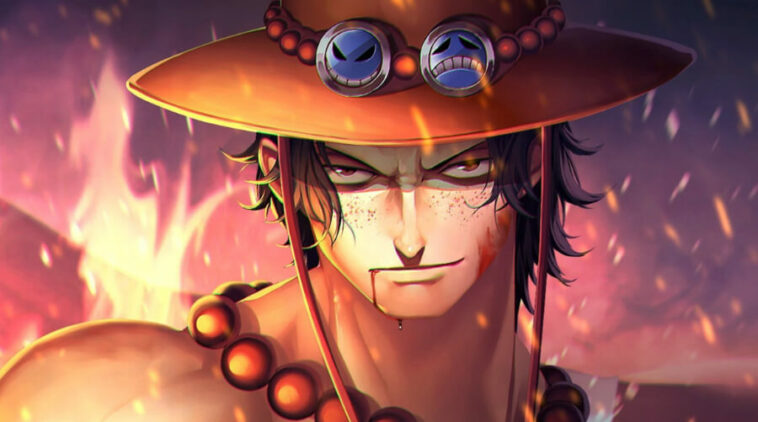 Ace, or known by his full name Portgas D. Ace, is the older brother of One Piece main protagonist Luffy.

Known by his nickname Fire Fist, Ace is the 2nd division commander of the Whitebeard Pirates and captain of Spade Pirates.

He is the ally of Straw Hat Pirates. He is hunted by the World Government due to his lineage and then sentenced to death, but he was freed during Summit War of Marineford only for him to die in the hands of Akainu.

Ace has a look that resembles Luffy, though they are not blood related. The difference is in his height and physical features that are more muscular than Luffy, compared to Luffy, Ace was looking more serious and tends to make a skeptical expression by raising his eyebrows.

He has freckles on his face which he inherited from his mother. The tattoo on his body is one of his remarkable features. He has Whitebead symbol tattoo on his back as it is a symbol for his pride and his joy.

On his upper left bicep, there’s a tattoo spelled ASCE vertically with S crossed as a tribute to Sabo, who also is his Jolly Roger.

He mostly didn’t wear any tops after he got his Whitebeard tattoo. He wore a black knee-length short and an eyelet-studded orange belt. As for shoes, he usually wears black boots.

Ace is a polite and intelligent man. He shares no similar traits with Luffy except for their recklessness as pirates. He likes to party and sometimes and shares the same impulsiveness with his brother Luffy.

“Whitebeard Is The Great Pirate Who Shaped This Era. Don’t Make Fun Of The Man Who Saved My Life.”

“Start Living before you start dying”

“I bear the mark of Whitebeard. I could never lose.”

“I am fire itself. You can’t even touch me.”

“The enemy should’ve known better. No sword can cut “fire”.”

“If I Yeild To Power, There’s No Point In Being Born A Man. I”ll Never Leave Anything To Be Regretted Later In My Life.”

“I am a free man. The Marines could never catch me.”

“Old man, everyone! And you Luffy. Even though I’ve been good for nothing my whole life, even though I have the blood of a demon within me. You guys still loved me! Thank you so much!”

“If you think you can run, you’re wrong. You’ve no choice but to fight me.”

“Why don’t you quit running your mouth and come at me?”

“I won’t let you take Whitebeard out! I’ll make Pops the Pirate King!”

Even though Ace should die in the way to protect Luffy, his character remains important in One Piece story as well to Luffy’s development of character.