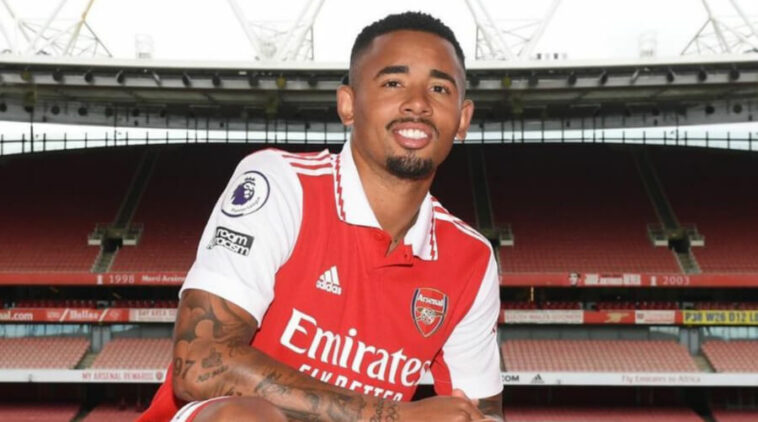 Football has been the calling for Gabriel Jesus since he was a kid. Growing up in Jardim Peri, Sao Paulo, when other kids were playing Brazilian Sambo, he drew himself to football.

He then played for different youth teams. When he plundered 29 goals in 15 tournaments for amateur club Anhaguera Associacao, the bigger club got interested in him and he got a chance to move to Palmeira youth team in 2013.

He makes his senior debut at the age of 17 under Palmeira’s senior side in 2015. His performance while he was in Palmeira makes scouts around the world buzz .

Scoring 95 in 236 matches during five seasons at Manchester City makes him rise to stardom and in 2022, he signed a deal with Arsenal on a five year contract.

While performing for Palmeira youth team, he scored 7 goals and reached the final of the 2015 FIFA U-20 World Cup.

This performance makes him get called on to represent Brazil and he makes his international senior debut in September 2016.

Gabriel Jesus also took part in the 2018 FIFA World Cup and participated in the Copa America 2019 and 2021.

“I know that I need to keep growing as a player.”

“I am very self-critical and always will be. I think this makes me want to improve, always. But just because I’m self-critical and say what I thought of my performance in a game, it doesn’t mean I will bring myself down, ever.”

“It was playing on the varzea where I learned to be a warrior, to fight for every ball, and then to never give it away.”

“I’m a normal lad. I’ve always been quite humble, and I like simple things.”

“I grew up very quickly because of the difficulties and responsibilities that I have always had.”

“I was lucky because my mother worked extremely hard, and our family always had food to eat.”

“I’m very attached to my family. My mother is hard on me when she has to be, and that makes a huge difference. Their support means I need concentrate only on playing.”

“I’m a normal person, and I like living this way – and always with a smile in my face.”

“My mother gave me a ball, and from then on, there was only football in my life.”

“I can’t put my mind to anything else. I’m not interested in hanging out or partying. For me, it’s all about the pitch: training, playing. But even when I go home, afterwards, it’s football the whole time. I think I’m obsessed!”

“I began playing football on the streets.”

Raised only by his mother in poverty makes him feel the need to grow up quickly because of the responsibility and fortunately, his mother is always by his side to guide him to pursue football.