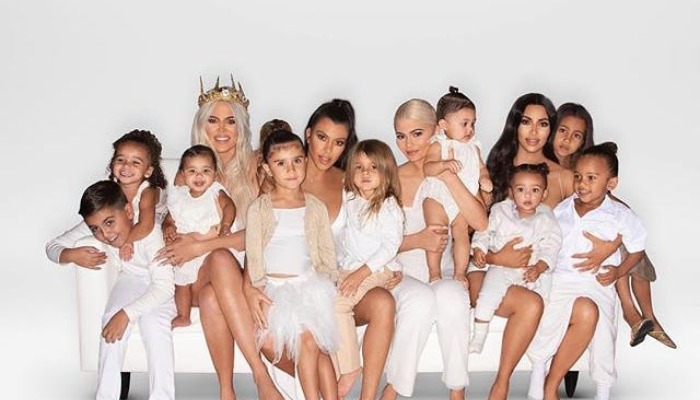 We know that Kardashian family is taken over the world to watch every single thing they do in television as well as social media.

They also become the trend setter for many stuffs and products. It would not be a surprise, since they look amazing and working hard to get there.

Moreover, people should be questioning about who will be the next generation of the beautiful and handsome Kardashian family later on.

The lovely and cute kids from them should be the answer. All the mother and father already introduced their kids in social media to make them comfortable in front of camera and the crowds.

Let’s get to know 10 lovely nieces and nephew of Kendall Jenner from her sisters and brothers in Kardashian family.

1. North West is the oldest kid of Kim Kardashian and Kanye West. She was born in June 15, 2013. She loves drawing and testing special make-up effect on her own

2. Chicago West is 5 years younger than North. She has a very cute curly hair which makes you will love her

3. The second baby from Kardashian and Kanye is Saint West. He was born in Los Angeles in December 5, 2015

4. The youngest and the cutest kid from West family is Psalm West. In Hebrew, Psalm means song

5. You are probably familiar with Kourtney’ kid Mason. Kendall ever posted a Instagram filter to know who is she looks like, then Mason’s name appeared. He is also the oldest kid of Kourtney

6. The only girl in Kourtney’s kids is Penelope Scotland Disick. She has brown straight hair which is perfect with her light brown eyes

7. Reign Aston Disick is the youngest kid. Aston in his name has meaning as king in Angle-Saxon

8. Khloe Kardashian only has one kid. She is True Thompson from her relationship with Tristan Thompson

9. Rob Kardashian and his girlfriend, Blac Chyna have a beautiful angel a month before they decide to end the relationship. Her name is Dream Renee Kardashian

10. Stromi Webster is a kid of Kylie kardashian with Travis Scott. She is very stylish like her mother

Read more: Decided to Out From The Show, 10 Facts From Carrie Ann Inaba

We will look up for the next generation in Kardashian family and how these young kids will turn into. Who is your favorite kid from Kardashian kid?