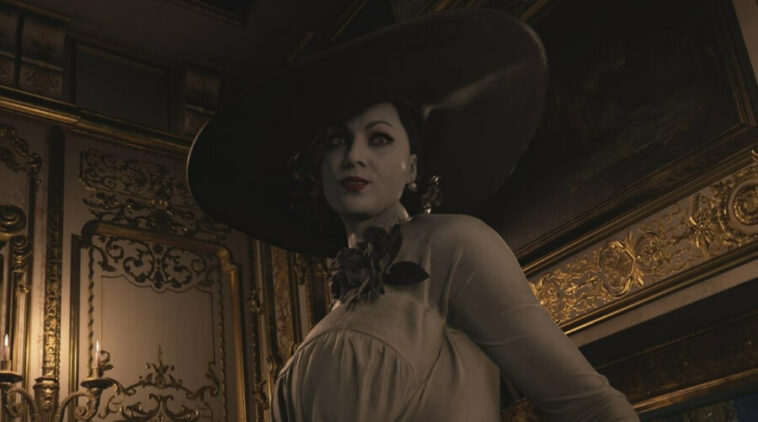 Lady Dimitrescu also known as her real name Alcina Dimitrescu is a villain in the game Resident Evil Village, released on May 7, 2021. Commonly known as Lady Dimitrescu, the mutant human aristocrat that rules Castle Dimitrescu.

Lady Dimitrescu was a human before she was turned into a human mutant by Mother Miranda, a cult leader that seeks a host to a parasitic intelligence and her daughter Eva.

However, the experiment by mother Miranda failed to make Alcina Dimitrescu a host instead, her body mutated and the parasite used in the experiment helped Alcina’s body to stop aging.

Just like how an aristocrat dresses, she wears a long white gown with pearls and black flowers on her sleeve.

Her hair was cut short and hidden behind her iconic black wide hat. She was also wearing black gloves.

Due to Cadou parasite that plays an important role in her mutation, she who stops aging would forever live in her 44 years old body.

One thing that makes this villain more haunting is that she is nine feet tall or about 290 cm tall. Because of how tall she is, she got the nickname tall vampire lady.

The name tall vampire lady was given because Lady Dimitrescu was involved in the cannibalism and murdering of local peasants.

Our villain might look scary because she consumes blood and is involved in many murders, but she is a calm and collected woman with elegant poise.

She can hold her anger and sometimes be snobbish, especially to those beneath her.

“You are so kind to me, daughters. Now, let’s take a look at him. Well, well. Ethan Winters, You escaped my little brother’s idiot games, did you? Let’s see how special you are.” – Alcina when capture Winter in the castle

“Mother Miranda. I regret to inform you that Ethan Winters has escaped that fool Heisenberg. Because he is in my castle, and has already proven too much for my daughters to handle! When I find him- No, Mother Miranda. Yes, of course I understand the importance of the ceremony. I won’t let you down. To hell with the ceremony! That man will pay for what he’s done”

“The man is of no use to anyone else. And my daughters do so love… Entertaining foreigners. Furthermore, I can assure you if you entrust the mortal to House Dimitrescu, my daughters and I shall deliver to you the finest cups of his slaughtered blood.” – Alcina in a meeting with the Four Lords and Mother Miranda

“A rat can’t run from the dragon’s claws!” – Lady Dimitrescu when chasing Winter

“It was cold, wasn’t it Daniela?” – Alcina when Daniela die

“You will learn what it means to insult house Dimitrescu.” – Alcina after cutting Winter’s arm

“Stupid manthing! You won’t live long, even if you run!” – Alcina chasing Winter

“No! How much blood and sweat do you think it took to raise those daughters? You have incurred an impossible debt!” – Lady Dimitrescu when she realizes Winter killed Cassandra

“Flesh, bones, I will devour ALL OF YOU!” – The Tall Vampire Lady when transforming

She appears to be cold and bloodthirsty, but actually has motherhood upon the grief of her three daughter’s death.