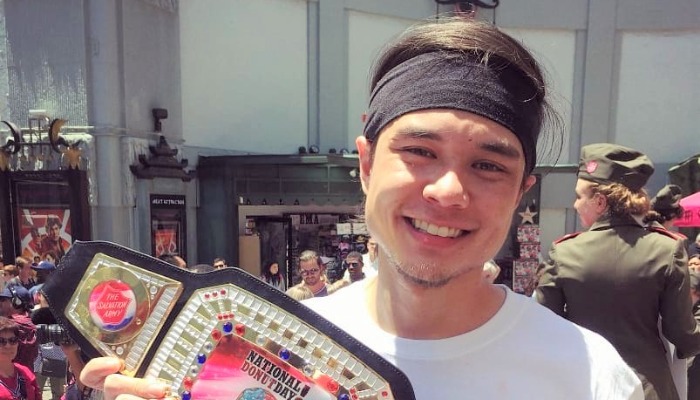 Matt Stonie is famous for his food challenges where he eats various types of foods as fast as possible.

He started joining Major League Eating in 2011. At that time, it was deep fried asparagus championship in California and Matt became the youngest contestant as he was only 18 years old.

Previously, he joined a lobster roll eating contest in 2010 and won. Matt became much more popular after eating 62 hot dogs and defeated Joey Chestnut, the defending contest champion in 2015.

He created a YouTube channel in 2012 to be close to his fans and update his eating activities.

Throughout his career, he has held many world records including eating a 5.5-pound birthday cake in 9 minutes in 2013, eating 20.5 Chicken Spiedies with only 10 minutes, and 71 pork ribs in 5 minutes in 2015.

2. He wants to show a good influence for eating vegetables

3. Matt holds the chicken challenge on his YouTube channel

4. He shows a huge slice of pizza

5. The real appearance of him eating during the contest

Matt Stonie has shared his love for eating with the world by joining world eating competitions and doing challenges on YouTube.