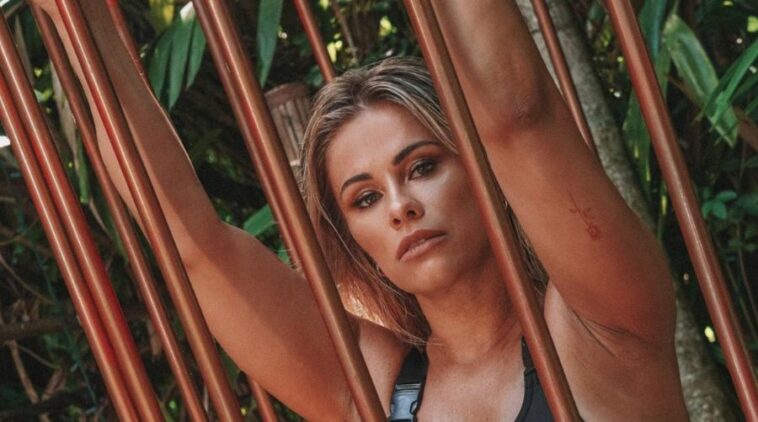 Paige VanZant is a professional wrestler, boxer, author, and OnlyFans Star. She was famous for her appearance in the UFC and for defeating Kaitlin Curran.

Paige VanZant learned martial arts and boxing to defend herself when bullied in school. When she was a kid, she moved to Spark, Nevada.

After that, she came across UFC veteran Ken Shamrock’s gym when looking for a dance studio. She decided to train in boxing and martial arts there.

In this case, she won amateur fights when she was 18. She made her professional MMA debut in 2012 at the UWF’s Tournament of Warriors against Jordan Nicole Gaza.

Later, she signed with Ultimate Fighting Championship (UFC) in 2013 for the Strawweight division.

Also, she competed as a cast member of the UFC. Still, she was eventually turned down by the reality show in 2014 because she was only 20.

When she turned 21, she could compete and face Kailin Curran at the UFC Fight Night: MacDonald vs Saffiedine.

Unfortunately, she suffered a back injury, so the bout was rescheduled for UFC Fight Night: Edgar vs Swanson. In the spell, she defeated Kailin Curran and gained more popularity.

Aside from her career in martial arts, she also makes a debut as a professional wrestler and will be appearing at the All Elite Wrestling (AEW) in 2021.

VanZant claimed to be married to Austin because her friend, Chael Sonnen, matched her as a couple. Then, their meeting was arranged with a blind date in 2017.

After that, the relationship between the two of them went smoothly until they finally dated. One year into a special relationship, they finally decided to get married in September 2018 and are still together today.

Paige VanZant’s net worth is around $3.5 million. In this case, her wealth is earned from several jobs Professional Wrestler, Boxer, Author, and OnlyFans Star.

VanZant’s main wealth comes from his professional career as a wrestler. She has total MMA fight earnings recorded at $564,500.

Not only that, but she also got a fight against Bec Rawlings in the UFC on Fox, earning $132,500.

In addition, she also earns a lot of money by being active on the adult platform OnlyFans. In this case, she made a significant profit from a paid subscription of fans, as much as $9.99 monthly.

“I want women to feel confident to speak up.”

“You need to say no to things you don’t want to do.”

“We need to teach women to stand up for themselves.”

“I worked so hard to get there I wasn’t going to let a broken arm take me out.”

“I question my skills, I question why I’m doing this and why I put myself through this”

“It felt liberating to get the story out but the pain doesn’t just go away. It’s also a hard lesson to learn it’s not your fault in these circumstances”

“I’m a fighter but I’m so much more than that. I’m so talented in so many areas and I’m going to continue to be successful inside and outside of fighting.”

“Fighting helped me find myself. It helped me realise I am a strong, beautiful, talented woman. I hope other women and girls who faced what I did can find some outlet where they realise their strength and power – and they’ve had it in them the whole time.”

Paige VanZant faced an unfortunate event when she was young. The constant bullying at school makes her move to another town and then change her last name to the one she uses now.