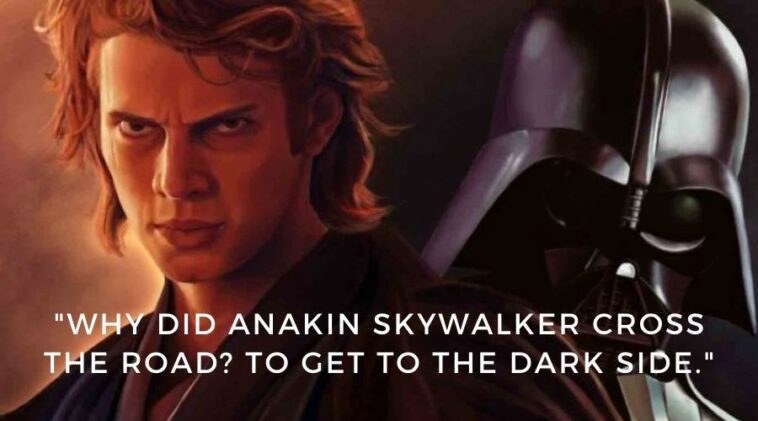 Star Wars Jokes  – We’re curious if you’ve heard any excellent Star Wars jokes recently. If not, it’s possible that you were browsing at Alderaan locations!

Do not be concerned and you have finally arrived in the correct location.

There’s something seductive about a good Star Wars joke, whether you’ve only recently finished watching the original trilogy or you’re an obsessive fan who’s seen all of the Star Wars films at least 20 times in your life.

In the movies, there is a common language, a common shorthand that we all can understand.

To that purpose, we’ve compiled a list of more than 110 of our favorite Star Wars jokes.

Keep in mind that if you share them with others, make sure you’re not on the Millennium Falcon… or otherwise, the ship would come crashing down. 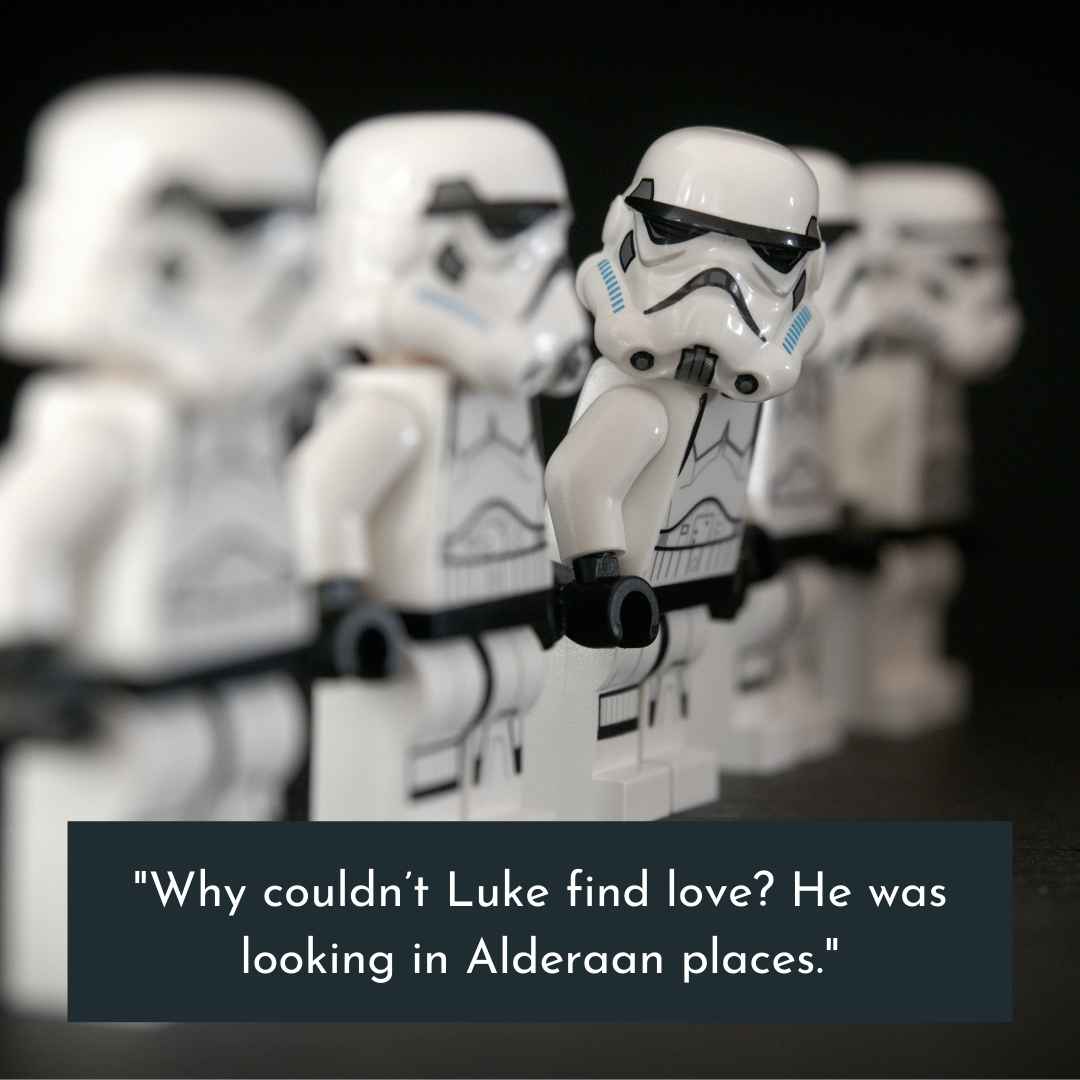 1. “What did Han Solo say to the waiter who recommended the haddock?
Never sell me the cods!”

2. “What was Lando’s nickname before he became a skilled pilot?
Crashdo.”

3. “Why didn’t any of Luke Skywalker’s marriages last?
He always followed Obi-Wan’s advice: “Use divorce, Luke.””

4. “What is Admiral Ackbar’s favorite type of music?
Trap.”

5. “Why does Princess Leia keep her hair tied up in buns?
So it doesn’t Hang Solow.”

6. “What do you call a rebel princess who only shops at Whole Foods?
Leia Organic.”

7. “What is Admiral Ackbar’s favorite type of music?
Trap.”

8. “Where did Luke get his cybernetic hand?
The second-hand store.”

9. “What do you call an eel that loves the new Star Wars trilogy?
A More-Rey Eel.”

10. “Why couldn’t Luke find love?
He was looking in Alderaan places.”

11. “Where does Princess Leia shop for Father’s Day?
At the Darth Maul.”

12. “What did the dentist say to Luke Skywalker?
May the floss be with you.”

13. “What do you call two Han Solos singing together?
Han Duet.”

14. “What did Leia’s adoptive parents say when she used to sleepwalk as a child?
Uh-oh, it’s the rise of Skywalker.”

15. “What did the dentist say to Luke Skywalker?
May the floss be with you.”

17. “Why did the tapeworm stay far away from Palpatine?
He didn’t want anyone to say he was in Sidious.

18. “How does Darth Vader like his toast?
On the dark side.”

19. “What did Darth Vader say when he walked into a vegetarian restaurant?
“I find your lack of steak disturbing.”

20. “We don’t want to sound racist but…
All stormtroopers look the same to us.” 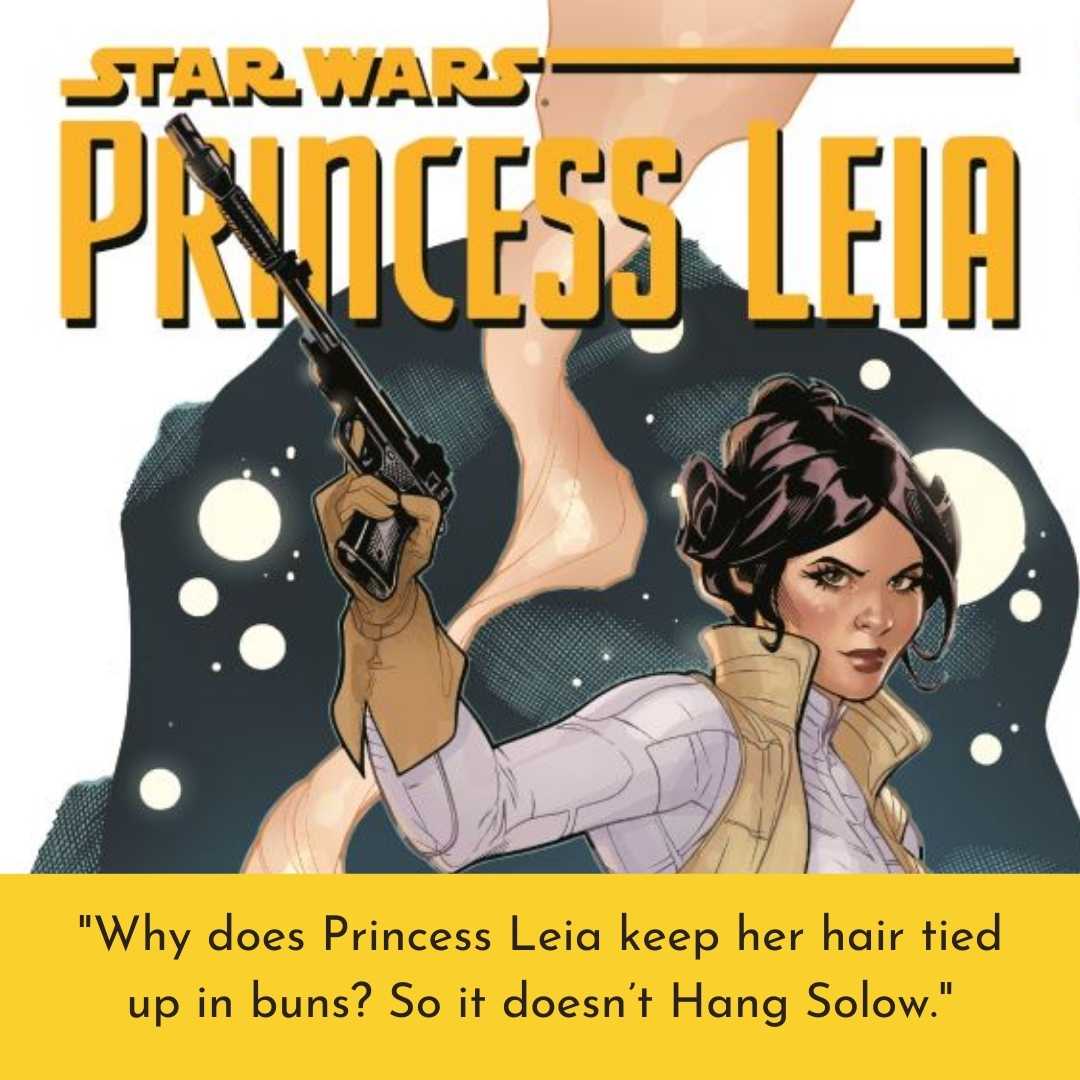 21. “What was Tarkin’s favorite brand of toilet paper?
Charmin to the last.”

22. “What did Darth Vader say when he walked into a vegetarian restaurant?
“I find your lack of steak disturbing.””

23. “How did Darth Vader cheat at poker?
He kept altering the deal.”

24. “What does your Canadian friend cooking dinner for you have in common with the Empire from Star Wars?
Pal-poutine.”

25. “What did Darth Vader say to the Emperor at the Star Wars auction?
“What is thy bidding, my master?””

26. “Stormtroopers in quarantine are like, “I miss people.”
I’m not too sympathetic. They always miss people.”

27. “Why was Darth Vader bad at sports?
He always choked.”

29. “Where does Kylo Ren get his creepy black clothes?
From his closet.”

30. “How did Darth Vader know what Luke was getting for his birthday?
He felt his presents!”

31. “What position does Darth Vader play in baseball
The Umpire.”

32. “No, I mean where does Kylo Ren buy his clothes?
From the mall. I mean, have you seen how much Kylo Ren stuff they have there right now?”

39. “Why was the droid angry?
People kept pushing its buttons.” 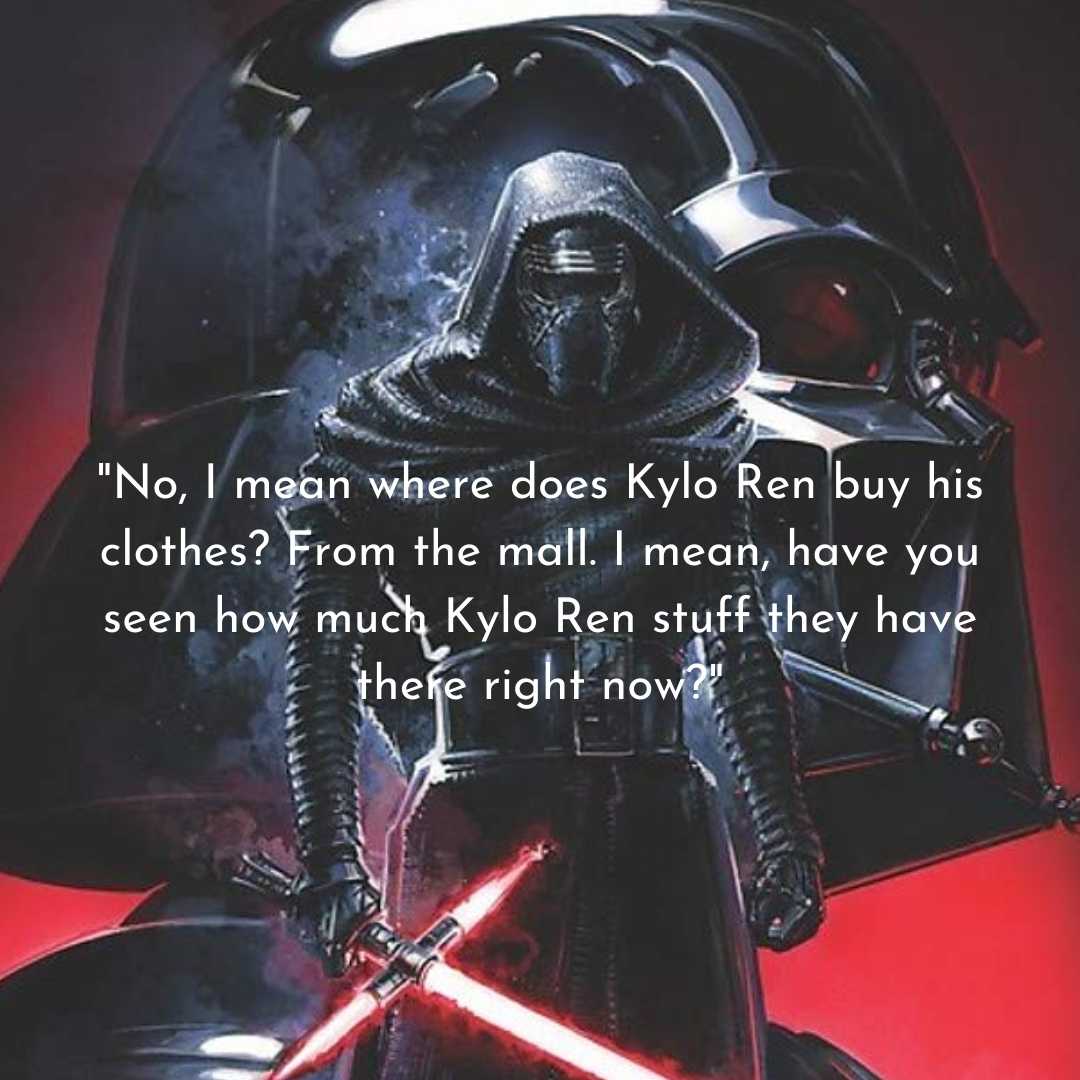 42. “Why is a droid mechanic never lonely?
Because he’s always making new friends.”

43. “What did Obi-Wan tell Luke when his young apprentice was having a difficult time using chopsticks at the Chinese restaurant?
“Use the forks, Luke.””

45. “My wife says she’s leaving me because of my obsession with Star Wars.
I said, “Please don’t go, honey. You’re the Obi-Wan for me.””

47. “Why do doctors make the best Jedi?
Because a Jedi must have patience.”

48. “What do you call five Siths piled on top of a lightsaber?
A Sith-Kabob.”

50. “How long has Anakin Skywalker been evil?
Since the Sith Grade.”

51. “Which program do Jedi use to open PDF files?
Adobe Wan Kenobi.”

52. “What’s Yoda’s advice for going to the bathroom?
Doo-doo or doo-doo-not-do.”

55. “What do you call Kenobi triplets?
Obi-Three.”

58. “I asked my wife to dress up as a bounty hunter from Star Wars.
I have a Boba fetish.”

59. “What’s the difference between Boba Fett and a time machine operated by Marty McFly?
One’s a Mandalorian, and the other’s a manned DeLorean.” 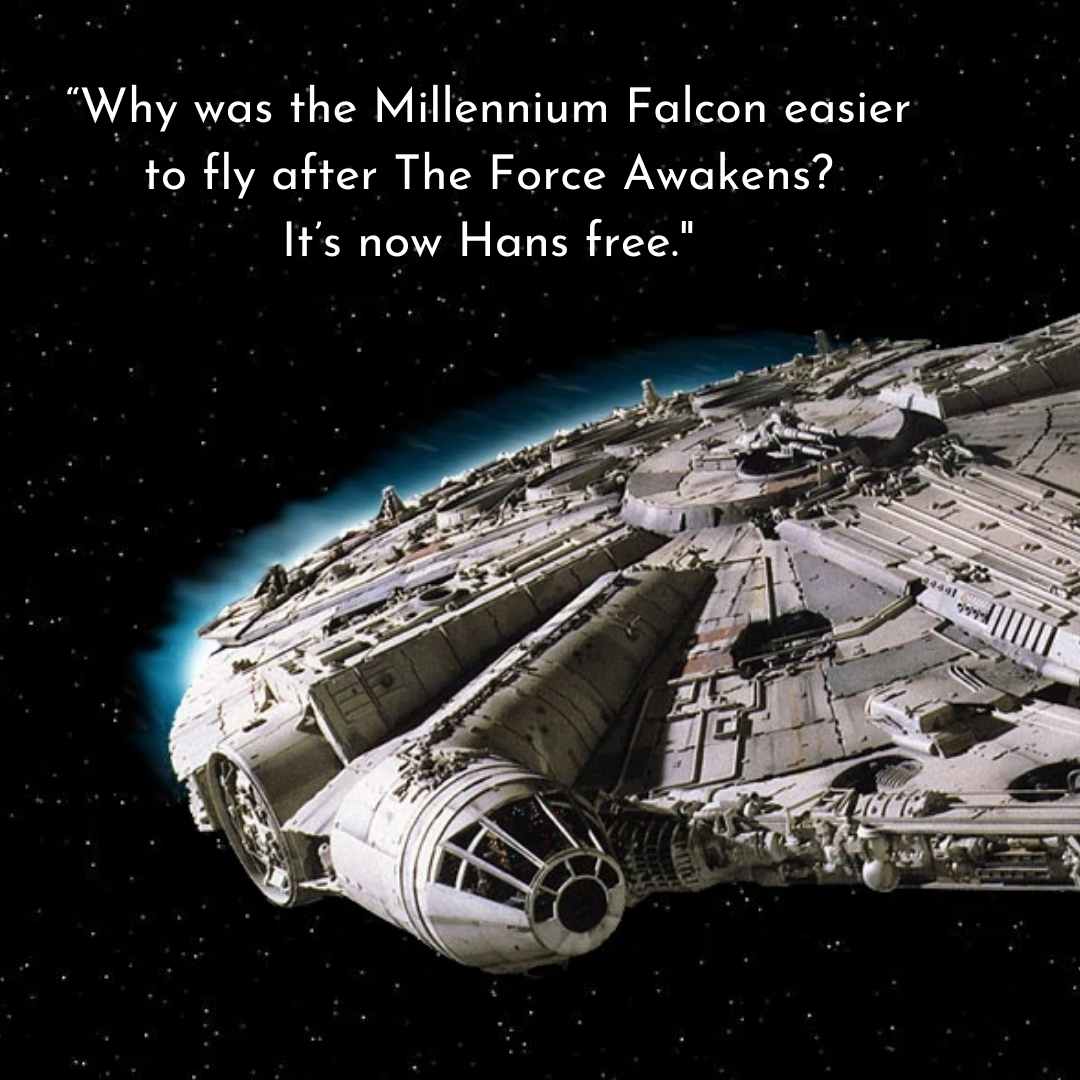 62. “How do Tusken Raiders cheat on their taxes?
They always single file, to hide their numbers.”

63. “What do you get if you mix a bounty hunter with a tropical fruit?
Mango Fett.”

65. “How do Tusken Raiders cheat on their taxes?
They always single file, to hide their numbers.”

68. “Any space smuggler will tell you, never try the blue milk at the Mos Eisley cantina.
It’ll give you the Kessel runs for twelve parsecs.”

70. “Which website did Chewbacca get arrested for creating?
Wookieeleaks.”

74. “What do Jawas have that no other creatures in the galaxy has?
Baby Jawas.”

75. “Did you know Fozzie Bear was in Star Wars?
He was an Ewokka-wokka!”

77. “Have you tried the gluten-free Wookiee treats?
I heard they’re a little Chewy.”

78. “Where do Gungans store their fruit preserves?
Jar Jars.”

79. “An Ewok strolls into a bar and says to the bartender, “I’ll have a whisky and… soda.”
The bartender says, “Sure thing—but why the little pause?”
“Dunno,” says the Ewok. “I’ve had them all my life.””

80. “Have you tried the gluten-free Wookiee treats?
I heard they’re a little Chewy.” 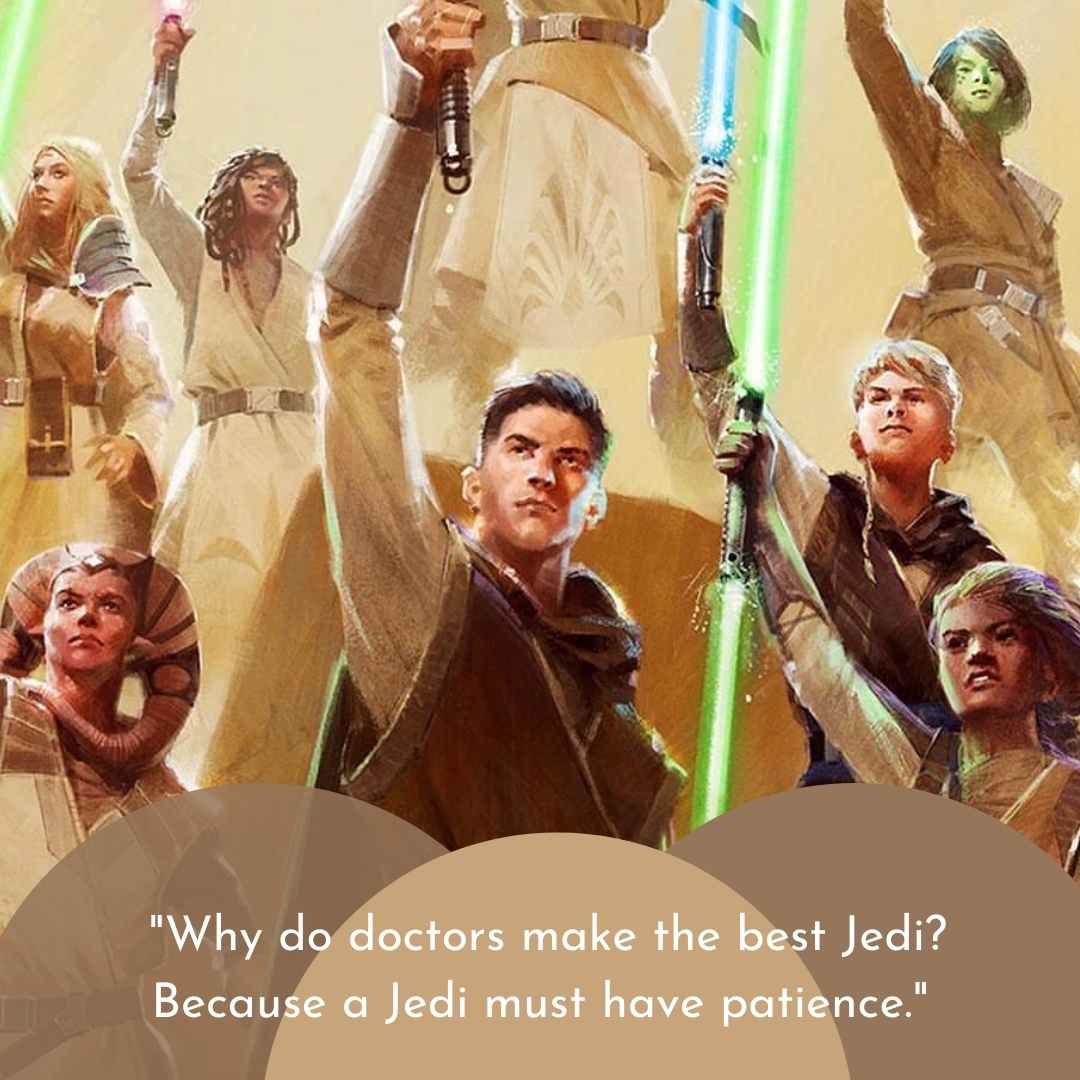 81. “Why are Death Star pilots fed up with space battles?
Because they always end up in a TIE.”

82. “Why should you never tell jokes on the Falcon?
The ship might crack up.”

85. “What do you call an over-powered janitorial stormtrooper in the Death Star?
A Super Duper Pooper Trooper.”

86. “What kind of spaceship did Luke fly in grade school?
An ABC-Wing.”

88. “What do you call an over-powered janitorial stormtrooper in the Death Star?
A Super Duper Pooper Trooper.”

89. “What time is it when an AT-AT steps on your chronometer?
Time to get a new chronometer.”

91. “How did they get between floors on the Death Star?
In the ele-Vader.”

92. “Why was the Millennium Falcon easier to fly after The Force Awakens?
It’s now Hans free.”

94. “The Star Wars text crawl walks into a bar.
“Get outta my pub!” the bartender yells. “We don’t serve your type here.””

95. “So my friend decided to get a face tattoo of her favorite Star Wars character.
You should’ve seen the Luke on her face.”

96. “Oh, sure everyone loves Star Wars on May 4th…
Until you tell your nephew you’re his father!”

97. “I found out I was colorblind by watching Star Wars.
I couldn’t see the green screen.”

99. “What do you call a Sarlacc Pit that only speaks in ironic mockery?
A Sar-chasm.”

100. “Did you know Chuck Norris was in every Star Wars movie?
He played the Force.” 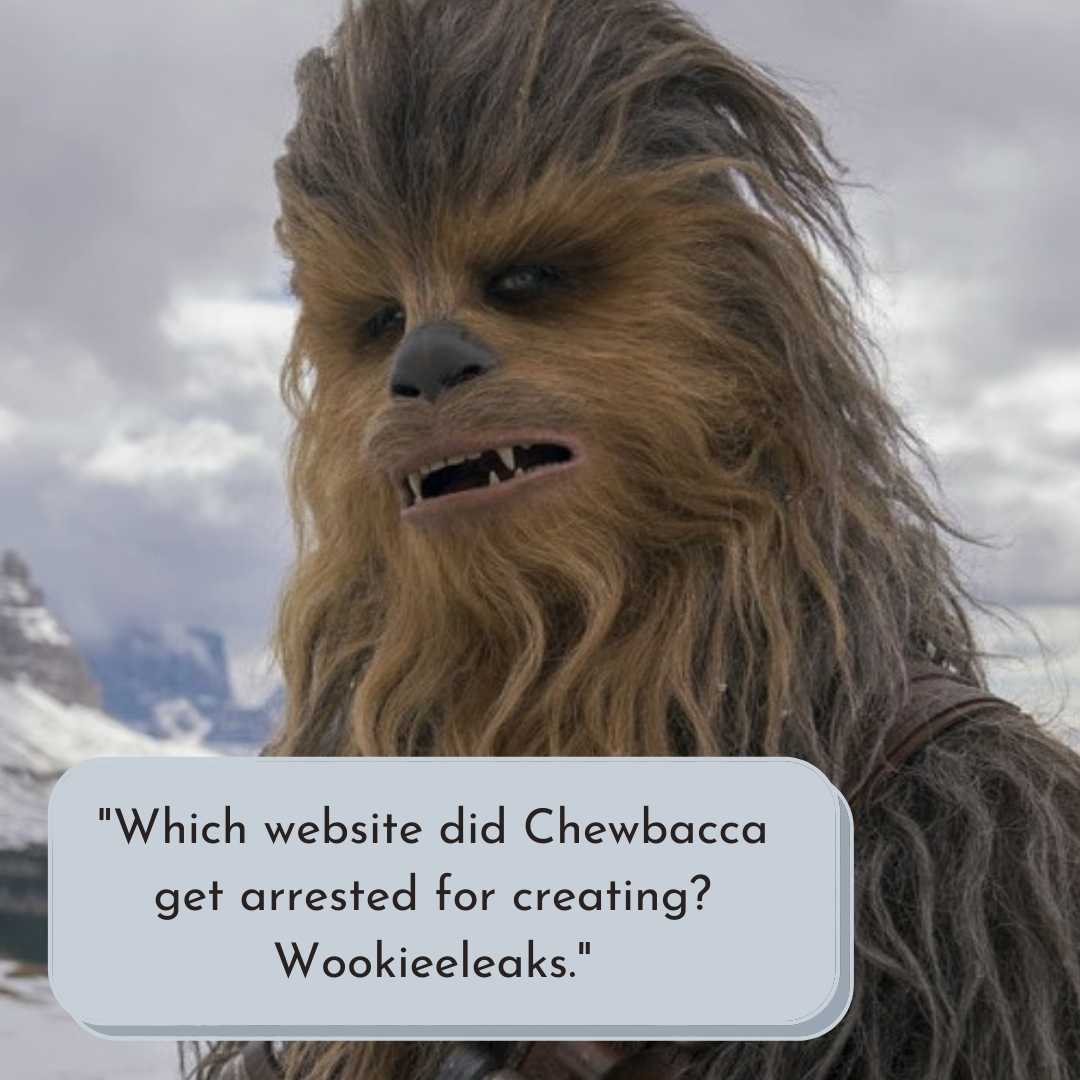 102. “Trying to come up with jokes about Star Wars is difficult.
Sometimes they seem a bit too forced.”

103. “Which program do Jedi use to open PDF files? Adobe Wan Kenobi.”

104. “Why did Anakin Skywalker cross the road? To get to the Dark Side.”

108. “What’s the internal temperature of a Tauntaun? Lukewarm.”

110. “What do you call five Siths piled on top of a lightsaber? A sith-kebab.”

Read also: 100 Funny Jokes to Make You and Your Kids Laugh All the Time

Now, you may make your children laugh by asking them whether they’d like their toast the way Darth Vader likes it – on the dark side of the force!

Enjoy this hilarious collection of Star Wars jokes and may the force be with you as you attempt to deliver these jokes without breaking out in laughter yourself.