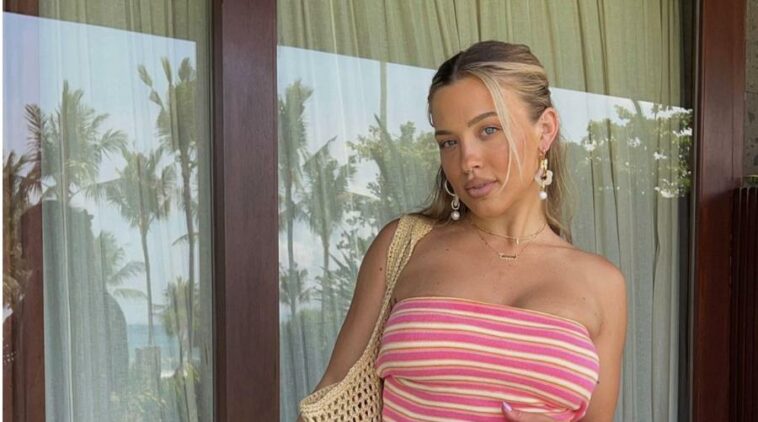 Tammy Hembrow is an Australian model, YouTube star, TikTok star, and fitness trainer. She was famous because her vlog about her pregnancy journey attracted people to subscribe to her YouTube channel.

She also shared about her fitness journey on her Instagram account. Even before she documented her pregnancy journey and workout details, she has many followers on her social media.

She inspired women when she posted pre and post pregnancy bodies on her media social. Through social media, she also shares her fitness tips and goals through a special workout routine.

After actively promoting her workout routine, she gained sponsorship and endorsed Protein World and Teami Blends.

Tammy Hembrow was engaged to Reece Hawkins for four years. They had one son and one daughter, but they separated in 2018. It is revealed that they didn’t get along even after the break-up.

They began to put their past for the sake of their child and trying to get along in 2020. In 2021, it was made public that Tammy had sole custody of her children.

Tammy Hembrow and Jahkoy Palmer dated since 2019. Their relationship didn’t last long as they confirmed their break-up in the same year.

Months after their break-up, Jahkoy revealed that the reason behind the break-up was their long distance relationship, as Tammy lives in Australia and Jahkoy lives in Canada.

Tammy Hembrow and Matt Poole have been in a relationship since 2020. In 2021, they announced their engagement.

Months later, they announced that they were expecting their first child together and a third child for Tammy Hembrow.

Tammy Hembrow has a huge amount of followers on Instagram. She also uploads about her daily life on YouTube, which has gathered subscribers.

With the immerse amount of followers on social media and YouTube, she could easily monetize her social media.

Her estimated net worth is around $2 million. Per one upload, she could make up to $33,000. It is adding to her net value and it surely increases by the year.

She is estimated to be paid $45,000 a month for advertisements on her social media.

“Like everyone I have a couple of guilty pleasures, I love donuts and chocolate in moderation!”

“Your workload and family often dictates how often you can get to the gym.”

“There was a time when I would work out five or six days a week but, with my workload and my kids, that’s become more of a challenge.”

“My best advice would be to listen to your body and think of the health of you and your baby.”

“Accepting failure. That might sound weird, but I think it’s not talked about enough. Some people think I cover myself in a veil of perfection but I know I’m most definitely not perfect, and that’s okay! What I want to do is inspire people to be the best version of themselves.”

“I feel happier when I work. If I’m not working out during the week, I feel more sluggish and have less energy and it’s really important for me to feel good with how busy I am and with two little kids.”

“Be authentic, don’t let people who try to bring you down achieve it, and go work for what you want.”

When she was a teenager, she had an unhealthy lifestyle, then she realized that she felt better when she led a healthy live. That’s the beginning of her journey in exploring fitness and wellness.