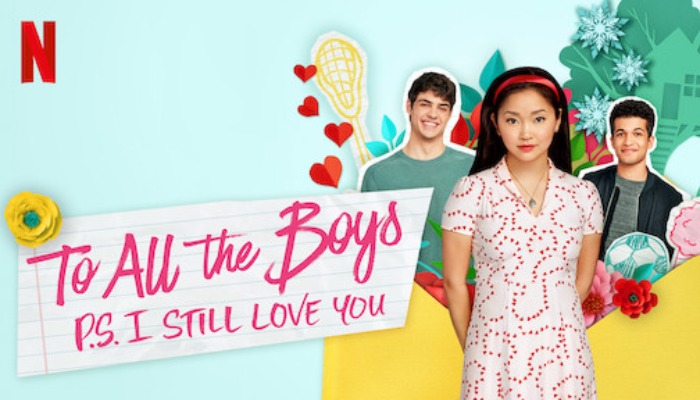 It was taken from the novel by Jenny Han, an author of New York Times best selling the young romance novel.

This film will be launched on 12 February 2021 in Netlflix. Moreover, this new film is directed by Michael Fimognari and produced by Chris Foss.

Then, many great actresses and actors are taking a part in this film, such as Lana Condor, Noah Centineo, Jordan Fisher, and Anna Cathcart.

Read more: The White Tiger, A Story of A Driver To Be Successful Businessman

The first film tells about Lera Jean, a simple student who never expresses feeling to someone that she loves.

However, she prefers to write letters  and keep it by herself until her sister finds it and sends them. Thus, the boys whom she ever loved starts to get close to her.

At the end, she becomes a girlfriend of the most famous and handsome boy, Peter Kavinsky.

Next, the second sequel focus on Lera and Peter’s relationship. They begin dating and loving each other.

However, the second lead comes in. John Ambrose, one of the boys whom Lera’s sister has been sent a letter, gets closer to her. Now, Lera gets confused about her feeling toward two of them.

The last film will be released on Valentine day. It tells about the next step of their relationship. They begin to continue their education at university.

Read more: Judas and The Black Messiah, A Biography of Fred Hampton

Peter has been accepted at  Stanford Univeristy, however, Lera is still confused to choose which university she will attend.

She thinks about a university in New York, but, Peter refuses it since he does not want to do a distance relationship.

All people anticipate this upcoming movie, especially how this movie will end. Since two sequels are great and amazing, thus this new movie will be more than best. Don’t forget to watch it on Netflix!

netflix movieto all the boys: always and forever