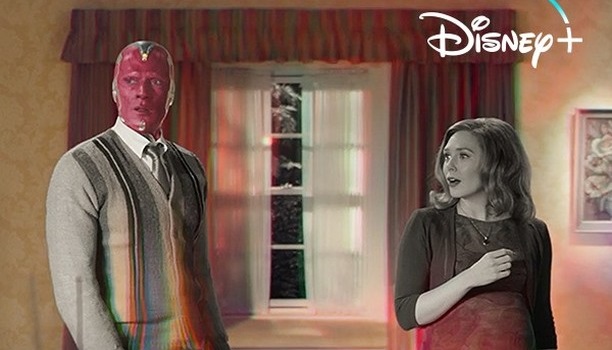 This TV program consists of 9 episodes and the first production of Marvel Studio which plays in a TV miniseries.

It is directly produced by Kevin Feige, the head of Marvel Studio and written by Jac Schaeffer.

WandaVision tells about a family life of two superheroes, Wanda Maximoff and Vision after the era of Endgame.

It takes place in Westview, a suburban town where they live happily as a couple. Moreover, the first scene of this miniseries happens in 1950 with black and white screen.

Then, it changes to 1970s and turns into the other decades. It combines a sitcom and hero genre which is fresh and new since the other hero movie mostly is serious and tense.

At the first time, The life of Wanda and Vision seem normal. However, everything changes when  they find out that everything does not work on how it should be.

In one scene from the trailer, Wanda looks like pregnant. Nevertheless, whether they will have kids or not is still a big question until the movie release.

This story also brings some awesome superstars, such as Elizabeth Olsen and Paul Bettany as the main characters.

The other actors and actress who supported WandaVision are Teyonah Parris, Kat Dennings, Randall Park, and Karthyn Hanh.

Elizabeth Olsen will act as Wanda Maximoff, a scarlet witch hero,who has known very royalty as well as the main cast, while Paul Bettany plays as Vision, an artificial intelligence program and Wanda’s husband.

Moreover, the others, such as Teyonah Parris will play as Monica Rambeau, Kat Danning as Darcy Lewis and Randall Park as Jimmy Woo, Karthyn Hanh as Agatha Harkness will make this story more attractive and interesting.

The story of WandaVision can you watch in Disney+. Do not forget to turn your alarm at the release time and watch the series with your family and friends. Happy watching!