Winnie The Pooh Quotes – There’s not only Doraemon and Spongebob in the cartoon world! For those of you who are children’s cartoons lovers, you may already be familiar with this one card character.

Even in 1997, the United Nations designated Winnie The Pooh, a famous cartoon character as the World’s Ambassador of Friendship.

This is what we can take and describe many motivations from the adorable and funny pooh bear figure.

Here are 100 Winnie The Pooh quotes that inspire young people with the sweet character he shows.

Winnie The Pooh Quotes, Inspire And Entertain You 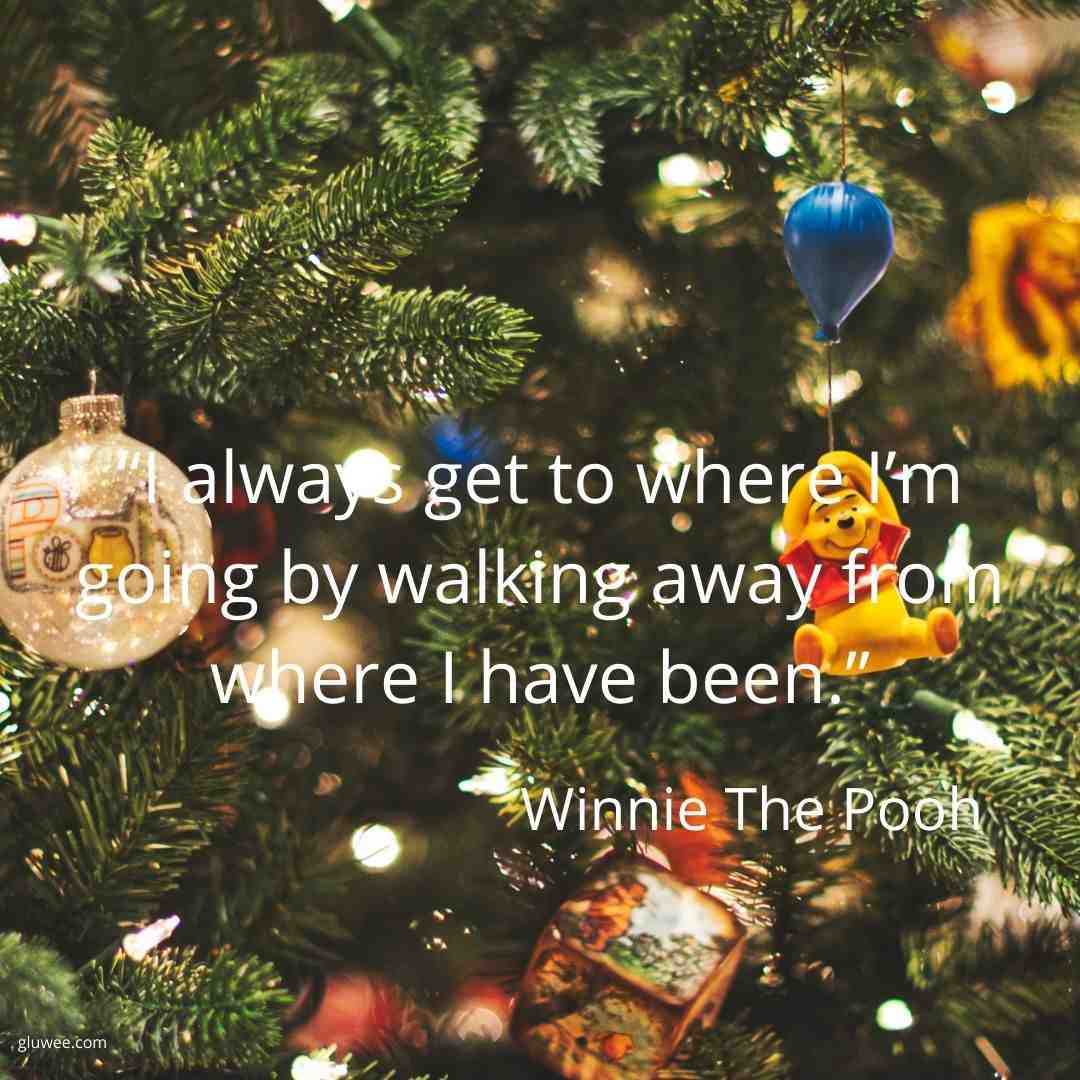 1. “If people are upset because you’ve forgotten something, console them by letting them know you didn’t forget you just weren’t remembering.”

3. “If possible, try to find a way to come downstairs that doesn’t involve going bump, bump, bump, on the back of your head.”

6. “I always get to where I’m going by walking away from where I have been.”

7. “Piglet opened the letterbox and climbed in. Then, having untied himself, he began to squeeze into the slit, through which in the old days when front doors were front doors, many an unexpected letter than WOL had written to himself, had come slipping.”

8. “He could see the honey, he could smell the honey, but he couldn’t quite reach the honey.”

9. “By the time it came to the edge of the Forest, the stream had grown up, so that it was almost a river, and, being grown-up, it did not run and jump and sparkle along as it used to do when it was younger, but moved more slowly. For it knew now where it was going, and it said to itself, “There is no hurry. We shall get there someday.” But all the little streams higher up in the Forest went this way and that, quickly, eagerly, having so much to find out before it was too late.”

10. “Owl explained about the Necessary Dorsal Muscles. He had explained this to Pooh and Christopher Robin once before and had been waiting for a chance to do it again, because it is a thing you can easily explain twice before anybody knows what you are talking about.”

11. “Owl looked at him, and wondered whether to push him off the tree; but, feeling that he could always do it afterward, he tried once more to find out what they were talking about.”

12. “Well, even if I’m in the moon, I needn’t be face downwards all the time,” so he got cautiously up and looked about him.”

13. “How sweet to be a Cloud Floating in the Blue! It makes him very proud to be a little cloud.”

14. “Owl,” said Rabbit shortly, “you and I have brains. The others have fluff. If there is any thinking to be done in this Forest – and when I say thinking I mean thinking – you and I must do it.”

17. “It isn’t as easy as I thought. I suppose that’s why Heffalumps hardly ever get caught.”

19. “You can’t help respecting anybody who can spell TUESDAY, even if he doesn’t spell it right.”

20. “My spelling is Wobbly. It’s good spelling but it Wobbles, and the letters get in the wrong places.” 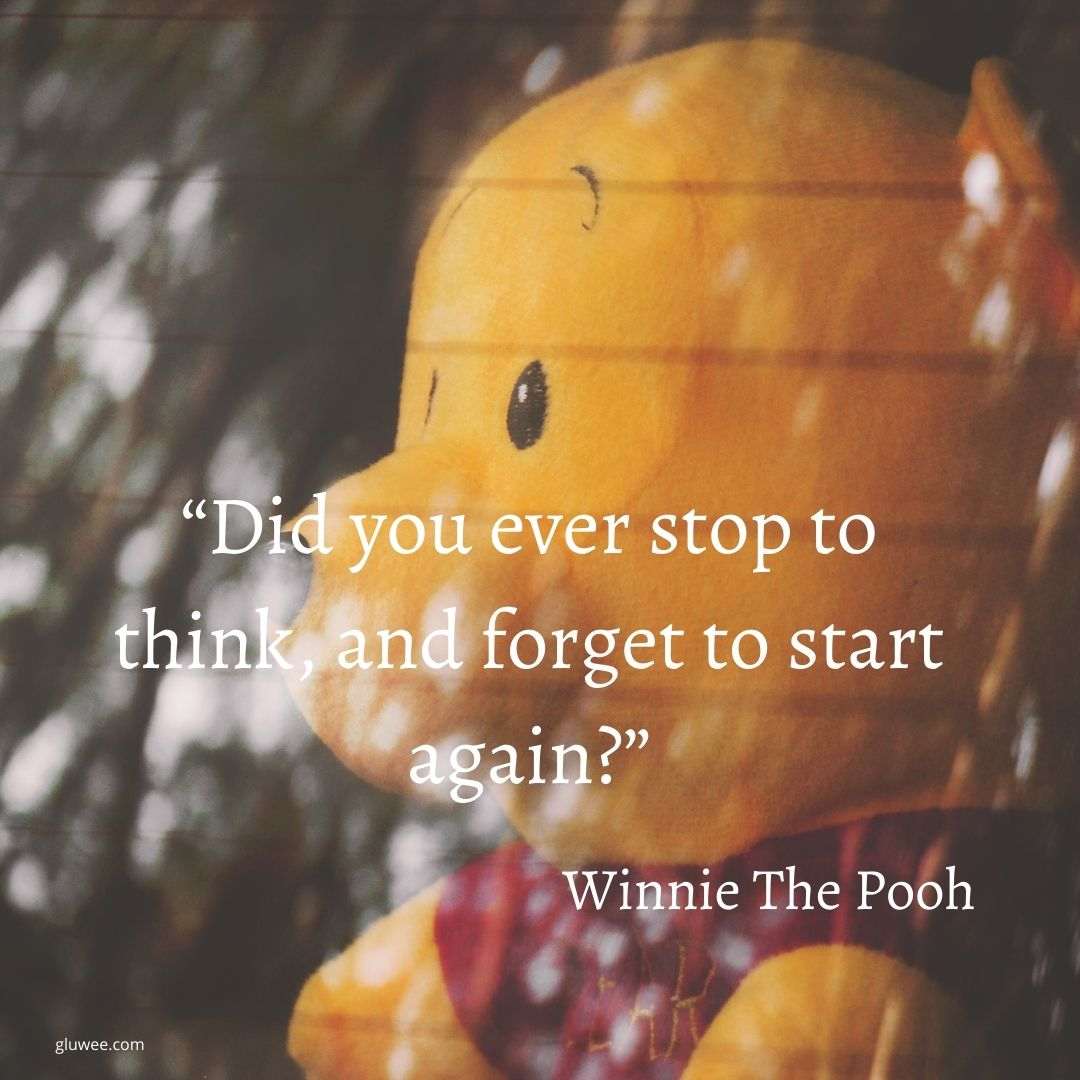 21. “Christopher Robin nodded. “Then there’s only one thing to be done,” he said. “We shall have to wait for you to get thin again.” “How long does getting thin take?” asked Pooh anxiously. “About a week, I should think.”

22. “Did you ever stop to think, and forget to start again?”

23. “If possible, try to find a way to come downstairs that doesn’t involve going bump, bump, bump, on the back of your head.”

24. “Well, you both went out with the blue balloon, and you took your gun with you, just in case, as you always did.”

26. “No brain at all, some of them [people], only grey fluff that’s blown into their heads by mistake, and they don’t Think.”

27. “And if anyone knows anything about anything,” said Bear to himself, “it’s Owl who knows something about something,” he said, “or my name’s not Winnie-the-Pooh,” he said. “Which it is,” he added. “So there you are.” Owl”

31. “They wanted to come in after the pounds”, explained Pooh, “so I let them. It’s the best way to write poetry, letting things come.”

32. “Whatever his weight in pounds and ounces, he always seems bigger because of his bounces.”

33. “If you were a cloud, and sailed up there, You’d sail on the water as blue as air. And you’d see me here in the fields and say: “Doesn’t the sky look green today?”

34. “It was a drowsy summer afternoon, and the Forest was full of gentle sounds, which all seemed to be saying to Pooh, ‘Don’t listen to Rabbit, listen to me.’ So he got in a comfortable position for not listening to Rabbit.”

36. “If you were a bird, and lived on high, You’d lean on the wind when the wind came by, You’d say to the wind when it took you away: “That’s where I wanted to go today!”

37. “But it’s always useful to know where a friend-and-relation is, whether you want him or whether you don’t.”

39. “If there ever comes a day when we can’t be together, keep me in your heart, I’ll stay there forever.”

40. “Those who are clever, who have a Brain, never understand anything.” 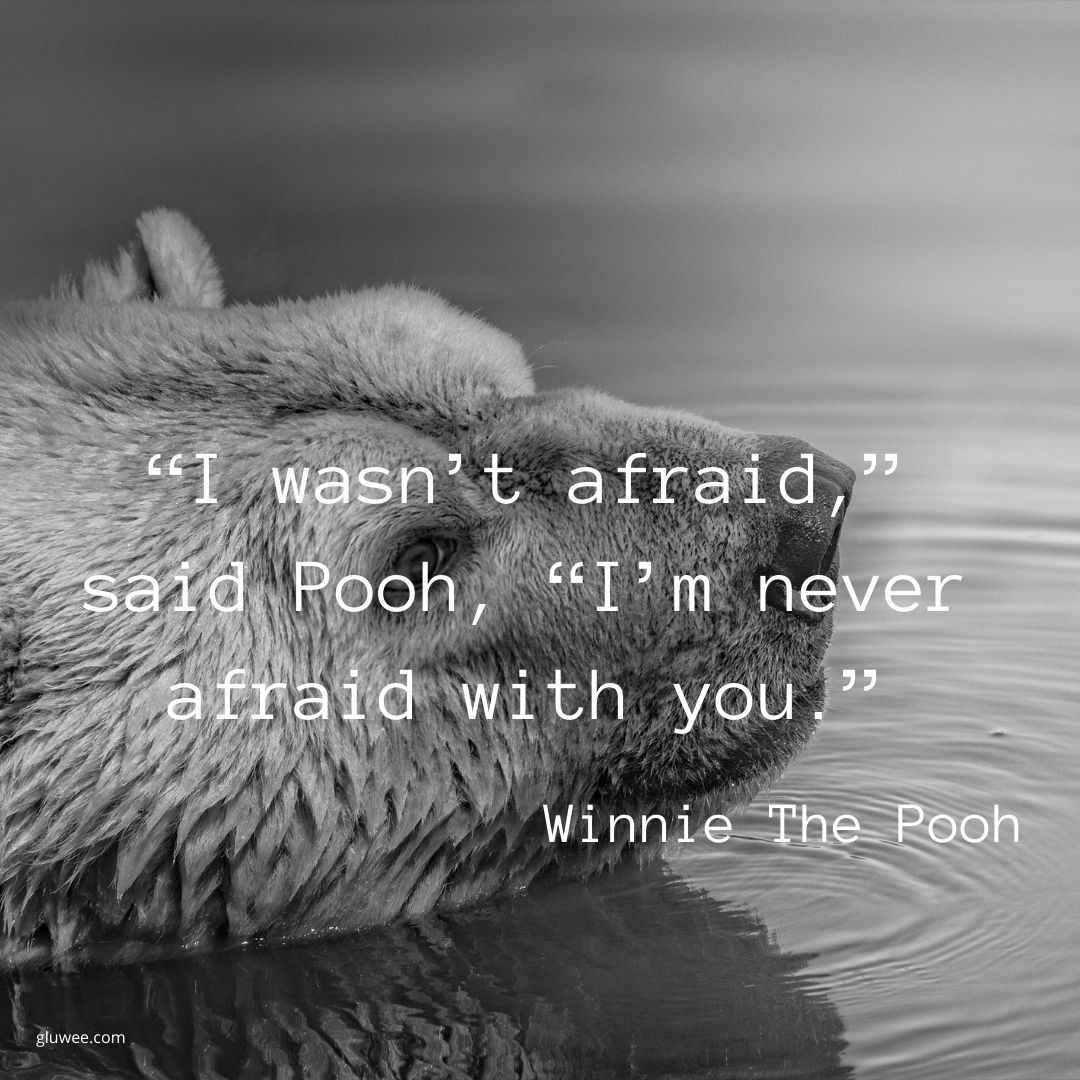 41. “How lucky am I to have something that makes saying goodbye so hard.”

42. “Nobody can be uncheered with a balloon.”

43. “Love is taking a few steps backward maybe even more to give way to the happiness of the person you love.”

44. “You can’t stay in your corner of the Forest waiting for others to come to you. You have to go to them sometimes.”

45. “I think we dream so we don’t have to be apart for so long. If we’re in each other’s dreams, we can be together all the time.”

46. “Rivers know this: There is no hurry. We shall get there some day.”

48. “When you are a Bear of Very Little Brain, and you Think of Things, you find sometimes that a Thing which seemed very Thingish inside you is quite different when it gets out into the open and has other people looking at it.”

49. “When you go after honey with a balloon, the great thing is to not let the bees know you’re coming.”

51. “Don’t underestimate the value of Doing Nothing, of just going along, listening to all the things you can’t hear, and not bothering.”

52. “Always watch where you are going. Otherwise, you may step on a piece of the Forest that was left out by mistake.”

53. “Before beginning a Hunt, it is wise to ask someone what you are looking for before you begin looking for it.”

55. “When you see someone putting on his Big Boots, you can be pretty sure that an Adventure is going to happen.”

56. “One of the advantages of being disorganized is that one is always having surprising discoveries.”

57. “Well,” said Pooh, “what I like best,” and then he had to stop and think. Because although Eating Honey was a very good thing to do, there was a moment just before you began to eat it which was better than when you were, but he didn’t know what it was called.”

58. “Just because an animal is large, it doesn’t mean he doesn’t want kindness; however big Tigger seems to be, remember that he wants as much kindness as Roo.”

60. “When speaking to a Bear of Very Little Brain, remember that long words may bother him.” 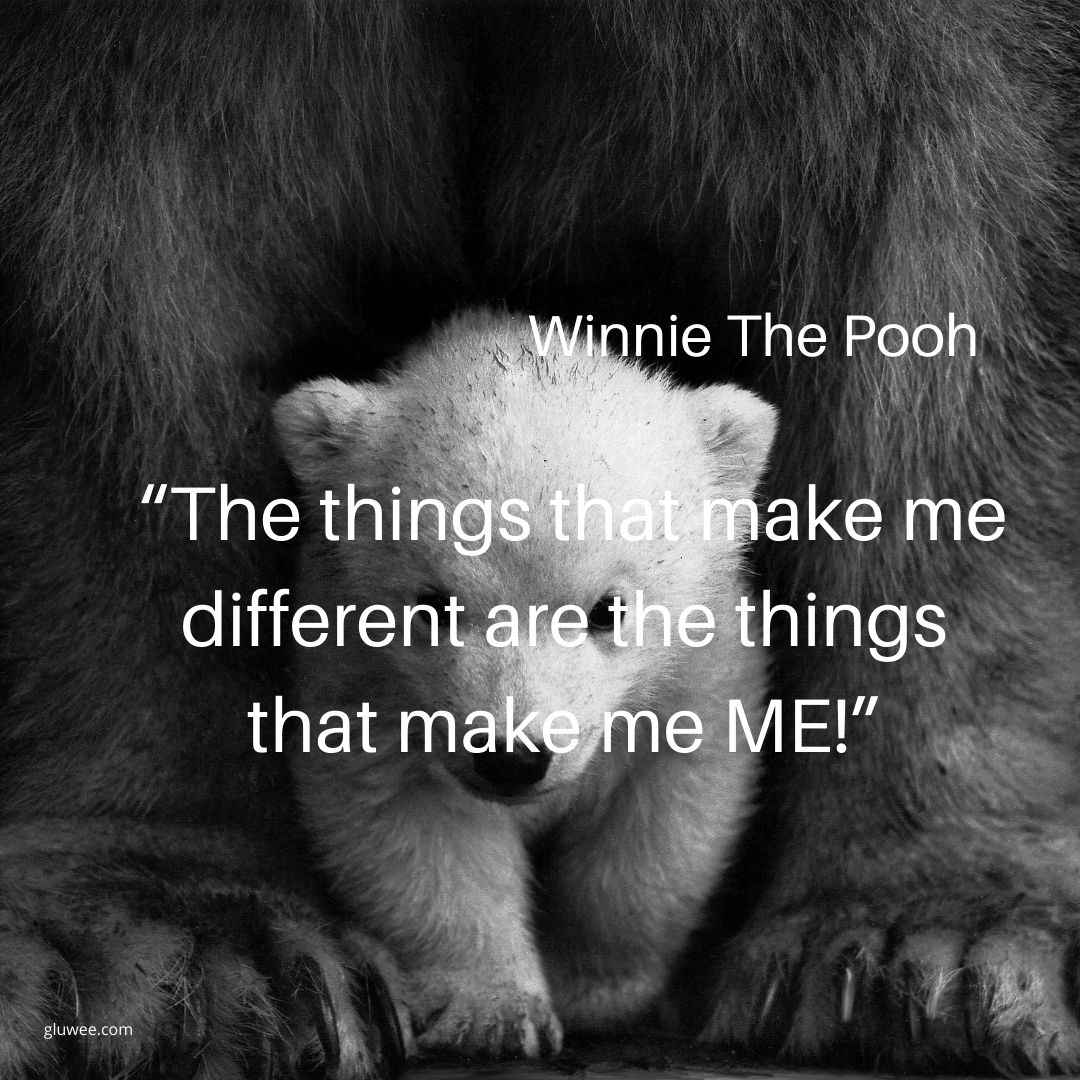 61. “He said it twice because he had never said it before, and it sounded funny.”

62. “He was telling an interesting anecdote full of exciting words like “encyclopedia” and “rhododendron”.”

63. “I knew when I met you an adventure was going to happen.”

66. “Sometimes the smallest things take up the most room in your heart.”

68. “People say nothing is impossible, but I do nothing every day.”

69. “A day without a friend is like a pot without a single drop of honey left inside.”

70. “It is more fun to talk with someone who doesn’t use long, difficult words but rather short, easy words like, ‘What about lunch?’”

71. “If the person you are talking to doesn’t appear to be listening, be patient. It may simply be that he has a small piece of fluff in his ear.”

73. “It isn’t much good having anything exciting, if you can’t share it with somebody.”

75. “What could be more important than a little something to eat?”

76. “Yesterday, when it was tomorrow, it was too exciting a day for me.”

77. “Piglet noticed that even though he had a very small heart, it could hold a rather large amount of Gratitude.”

79. “I think we dream so we don’t have to be apart for so long. If we’re in each other’s dreams, we can be together all the time.” 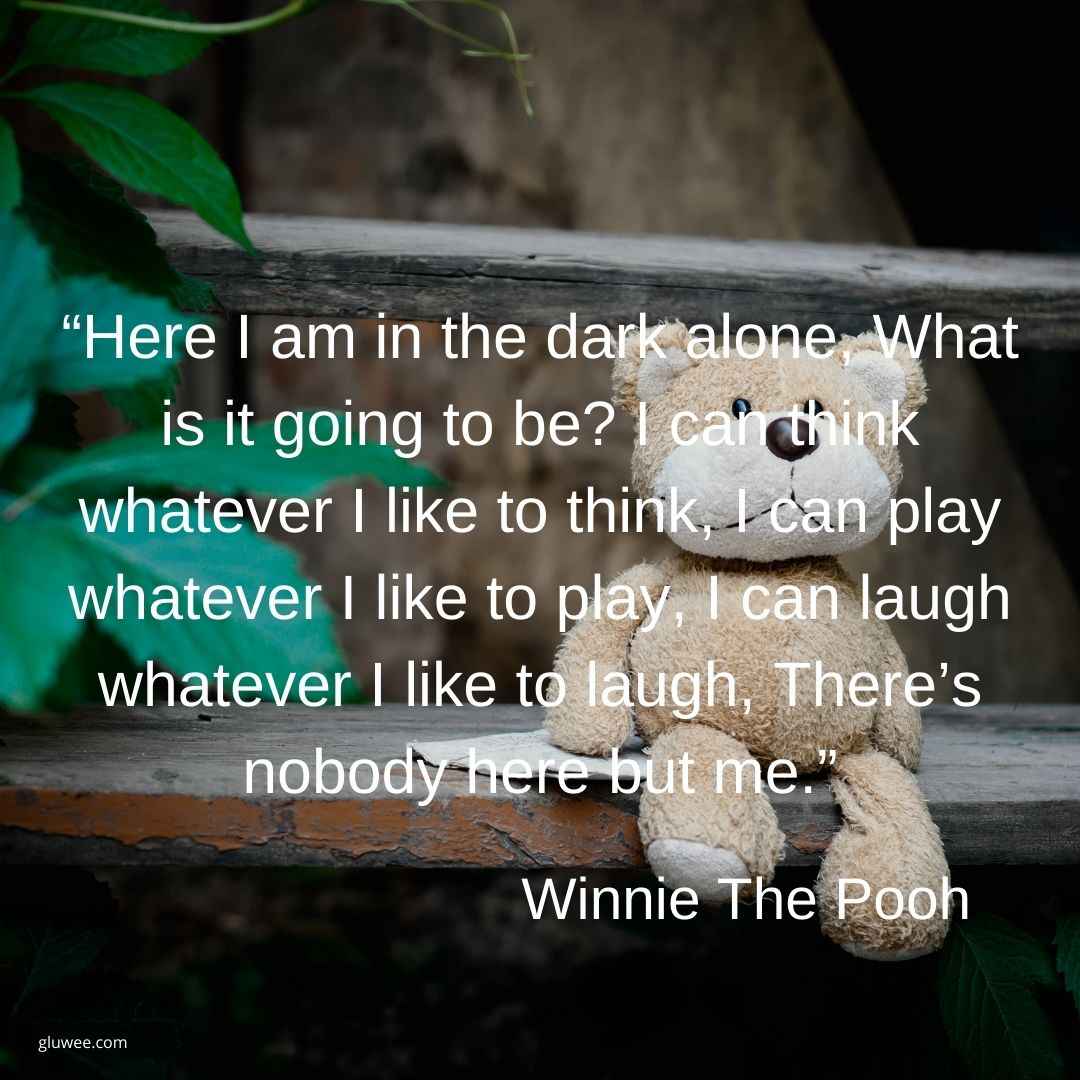 81. “Honey or condensed milk with your bread?” he was so excited that he said, “Both,” and then, so as not to seem greedy, he added, “but don’t bother about the bread, please.”

84. “But, of course, it isn’t really Good-bye, because the Forest will always be there… and anybody who is Friendly with Bears can find it.”

85.“Pooh couldn’t sleep. The more he tried to sleep the more he couldn’t. He tried counting Sheep, which is sometimes a good way of getting to sleep, and, as that was no good, he tried counting Heffalumps. And that was worse. Because every Heffalump that he counted was making straight for a pot of Pooh’s honey, and eating it all. For some minutes he lay there miserably, but when the five hundred and eighty-seventh Heffalump was licking its jaws, and saying to itself, “Very good honey this, I don’t know when I’ve tasted better,” Pooh could bear it no longer.”

86. “People say nothing is impossible, but I do nothing every day.”

87. “Wherever they go, and whatever happens to them on the way, in that enchanted place on the top of the forest, a little boy and his Bear will always be playing.”

88. “You can’t stay in your corner of the Forest waiting for others to come to you. You have to go to them sometimes.”

90. “It is more fun to talk with someone who doesn’t use long, difficult words but rather short, easy words like “What about lunch?”

93. “For some time now Pooh had been saying “Yes” and “No” in turn, with his eyes shut, to all that Owl was saying, and having said, “Yes, yes,” last time, he said “No, not at all,” now, without really knowing what Owl was talking about.”

94. “Drinking your milk and talking at the same time may result in your having to be patted on the back and dried for quite a long time afterward.”

95. “And really, it wasn’t much good having anything exciting like floods, if you couldn’t share them with somebody.”

97. “I used to believe in forever, but forever’s too good to be true”

98. “If the person you are talking to doesn’t appear to be listening, be patient. It may simply be that he has a small piece of fluff in his ear.”

99. “When you are a Bear of Very Little Brain, and you Think of Things, you find sometimes that a Thing which seemed very Thingish inside you is quite different when it gets out into the open and has other people looking at it.”

Those are 100 Winnie The pooh Quotes that inspire from the funny and adorable pooh bear figure that will never be forgotten.