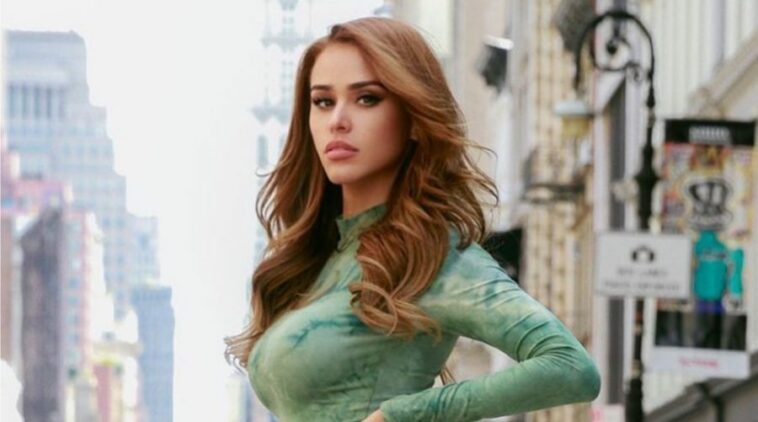 Yanet Garcia is a Mexican TV host, model, actress, OnlyFans star, and TikTok star. She was famous as the attractive weather reporter.

Yanet Garcia began her career as a model. She competed in Nuevo Leons heat, a national modeling contest.

She gained people’s attention because of her attractiveness. She then makes a career as a reporter before making it as a weather reporter.

Her name became the topic after she became the weather reporter for Mexican TV station Televisa Monterry.

Playboy even named her as the sexiest and hottest girl that will make you want to watch the weather forecast.

After the fame because of her career as a weather reporter, she spread her wings to modeling and became the cover page of H Para Hombres in October 2015 edition.

In 2019, she left her job as a weather reporter and followed her boyfriend, Lewis Howes to go to California.

She makes her debut as an actress in 2019 at the movie Sharknado: Global Swarming. In the same year, she also played a popular role in the movie Belleznismo.

She also joined OnlyFans to become the content creator in OnlyFans and provides adult content for her adult followers.

Currently, aside from becoming a model, she also became a fitness trainer on the Fitplan app. She provides her diet and fitness routine to her paid subscribers.

Yanet Garcia dating YouTube star, Faze Censor, for quite long time before their break-up in 2018.

The breakup in unavoidable as her girlfriend, Faze didn’t have time for her and was only focusing on his video game Call of Duty.

Faze later explaining further the reason for their breakup was because her interfered in his life like micromanaging the friend he could befriend.

He also stated that his relationship with Garcia was rather shallow and too focused on social media.

Yanet Garcia shared a passionate relationship with Lewis Howes and they both publicly shared about their relationship in 2020.

They often share pictures alongside each other on their social media. But, the relationship comes to an end a year later.

Their end comes to the surface after a fan asked her if she had a boyfriend, to which she answered no.

They later revealed that the reason for their breakup was a disagreement between those two upon her joining the OnlyFans platform and Howes asking her to quit the platform.

Yanet Garcia is rumored to date Dr. Mike Varshavski, an internet personality and specialist in family medicine. He was named as The Sexiest Doctor Alive by People magazine in 2015’s issue.

Neither Yanet or Mike confirmed their relationship, but they have been following each other on social media and have been liking each other’s pictures.

Yanet Garcia has started modeling since she was 15. It was not news if she had accumulated wealth because she had worked since a young age.

Her net worth is around $5 million. She got it from various sectors like modeling, brand endorsement, being a fitness trainer, and being a content creator on OnlyFans, which paid her content $20 per month.

“I believe in myself and that’s enough”

“No one is you, that is your power”

Yanet Garcia is famous because of her career as a weather reporter. Thought she reported it in Spanish, but her fame reached globally as her followers increased rapidly.