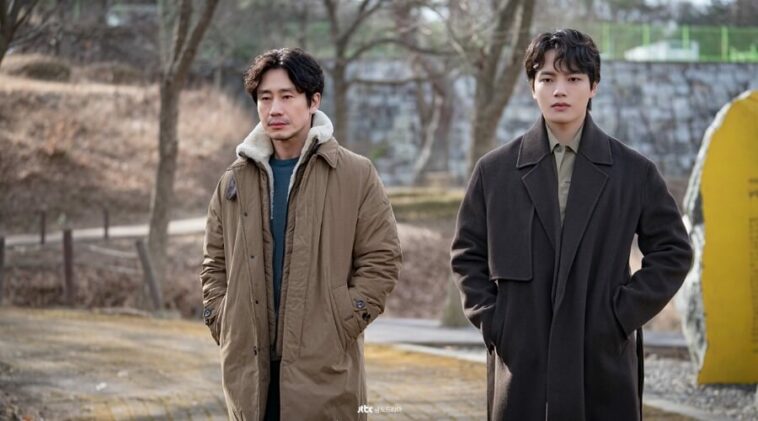 This drama got a lot of attention because of the amazing plot and characters, which are starred by Shin Ha Kyun and Yeo Jin Goo.

Before Shin Ha Kyun starred in this drama, he had starred in some dramas, such as Less Than Evil (2018) and Soul Mechanic (2020).

Beyond Evil was aired on JTBC every Friday and Saturday at 23:00 KST to replace the previous JTBC drama, Hush.

Synopsis of Beyond Evil

There is a detective who is capable to do anything related to the crime. That person is Lee Dong Sik (Shin Ha Kyun), who recently works in a police station at Manyang.

When he lives there, there’s nothing challenging. His life is very quiet and nothing really happens there.

But his quiet life doesn’t be quiet anymore after the new detective at that police station, Han Joo Won (Yeo Jin Goo) is transferred there.

Joo Won shortly becomes Dong Sik’s partner and boss. Besides, Joo Won is also a detective with an elite background. But, he hides a secret.

After Joo Won comes, more criminal cases popping out. They finally work together to find the killer of the serial murder criminal case that disturb that city.

A proficient detective who works at Manyang Police Substation, Gyeonggi Province. In that new city, he lives quietly. But one day, the serial murder case makes him busy.

A transferred detective who comes from Seoul Metropolitan Police Agency. He is handsome and has a strong background. Also, her capability as a detective is spectacular.

Trailer of Beyond Evil