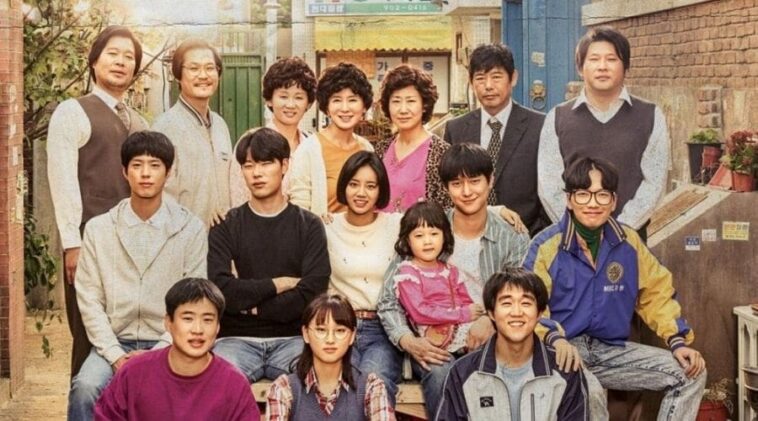 This drama actually gets inspiration from Three Families Under One Roof, an MBC Korean drama that had aired from 1986 until 1994.

Even so, the characters and the story aren’t related at all to that drama.

This drama began to shoot in 2015 in Gyeonggi Province, so was the script reading process for all cast.

Previously, Hyeri had starred in Seonam Girls High School Investigators (2014) and Hyde, Jekyll, Me (2015) before filming this drama.

Park Bo Gum also once starred in Wonderful Mama (2013) before appearing in this drama.

Reply 1988 was aired on tvN every Friday and Saturday at 19:50 KST to replace the previous tvN drama, Second 20’s.

Read more: So I Married An Anti-Fan – Cast & Summary

This drama tells a story about a family and a group of friends which sets in previous 1988 year.

There are a group of friends who have already become friends since childhood.

They are all the students of a high school, meanwhile, Taek is one of the go players.

Because they have been growing up together and their families are really close, they usually spend most of their time in Taek’s room.

But their family condition is different from each other.

Duk Sun lives in a semi-basement house and has a poor family. This is because her father, Dong Il, (Sung Dong Il) had to make a guarantee for the debt of someone.

Even so, Duk Sun is really a cheerful and happy person. She loves singing, dancing, and always bickering her sister, Bo Ra (Ryu Hye Young)

This condition is different with the family of Jung Hwan, which is rich.

Meanwhile, Sun Woo has a good family. He becomes a good role model at his school, a good brother, and also a good son.

Dong Ryong loves hanging out and dance with his friends and he didn’t want to give his shot again to go to a college because his academic score is low.

On the other side, Taek dropped out from school and becomes the go player under the name God.

Duk Sun is a very cheerful, bright, and a bit crazy girl. She loves her friends so much but she is confused about achieving her dream because she doesn’t have any idea.

Even though she’s not smart as the typical ‘smart student’, she really has a high spirit of life.

By his friends, he usually is called as Jung Pal. He is a sarcastic guy, but actually has a really sweet and tender heart.

He is smart, athletic, and handsome.

The typical ‘Straight A Student’ and always do his best to be a good son, good student, and good brother.

A professional Go player and he is quiet enough among his friends.

Similar to Duk Sun, he loves joking, dancing, singing, and is not that smart to achieve first place in the school exam. Even so, he always has the most surprising insight and wisdom.