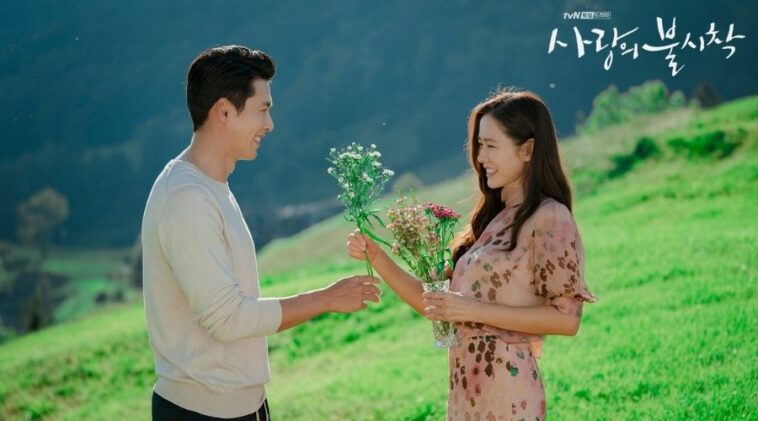 Before becoming the favorite actor in this drama, Hyun Bin had become the main actor for Hyde, Jekyll, Me (2015), and also Memories of the Alhambra (2018).

Crash Landing On You was aired every Saturday and Sunday at 21.00 KST on tvN, which replaced the schedule of Melting Me Softly.

Synopsis of Crash Landing On You

This story begins when a beautiful and powerful conglomerate heiress, Yoon Se Ri (Son Ye Jin) appears in the beginning.

She is known as one of the most powerful conglomerates in her country, South Korea.

Someday, Se Ri takes an opportunity to do paragliding. But unfortunately, that paragliding doesn’t run well as she imagines before.

When she does paragliding, she gets an accident because of the strong winds. These strong winds direct her to North Korea.

In there, Se Ri meets a guy namely Jeong Hyeok (Hyun Bin). He is a handsome army of North Korean.

Because she knows Ye Ri comes from South Korea, he tries so hard to hide and protect her. Later, he falls deeply to Se Ri.

Read more: So I Married An Anti-Fan – Cast & Summary

Beautiful, rich, and powerful. That’s how the appearance of Se Ri. She is the heiress of Queen’s Group but actually, she has complicated family affairs.

After meeting Jeong Hyeok, she accidentally falls deeply with him.

A North Korean army who is a hard worker. He is proficient and admired by his team.

One day, by accident, he meets Se Ri from paragliding and since then, he has to hide and protect her before she goes back to her country.

An heiress of a department store in North Korea. Also, she is the fiancee of Jeong Hyeok. Unfortunately, Jeong Hyeok doesn’t feel the same for her. Later, she falls deeply to Seung Jun.

He is very charming and smart. Unfortunately, he gets bankruptcy in her family.

Trailer of Crash Landing On You