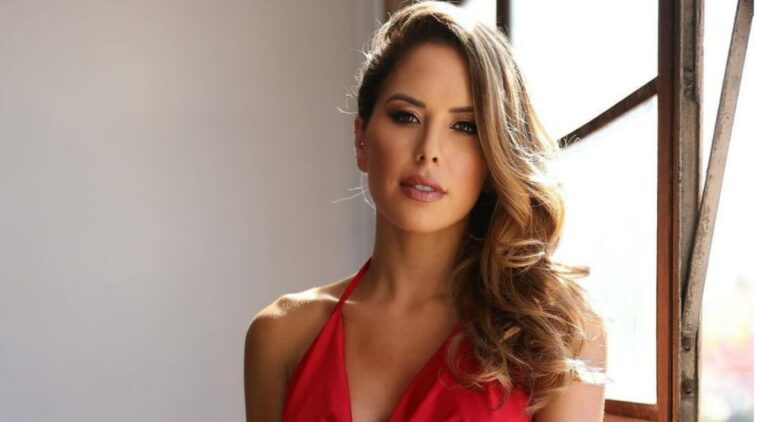 Brittney Palmer begins her first career in the performing arts as a professional dancer in the show Jubilee at Baily’s Las Vegas and then is hired as a lead dancer in X Burlesque.

In 2011, she appeared on YouTube along with model Jo Garcia in a Mortal Kombat themed video. The video garnered over 600,000 views by September 2013.

Her career as an Octagon Girl or ring girl began when she appearance at the World Extreme Cagefighting. She stayed there until it merged with Ultimate Fighting Championship or UFC.

Her job as a ring girl including preparing players and rings for the next round, announcing fights, and cheering the audience.

She also worked on philanthropist work through her paintings. She has auctioned her paintings for the biggest charities and donates it.

Aside from her donations through her paintings, she also became the artist ambassador for the UNICEF, Lady Gaga’s Born This Way Foundation.

In 2014, she married to a Aaron Zalenwski, a radio host and an investment banker. But the marriage didn’t last long as Aaron died in 2015.

“I am constantly trying to find different ways to source protein, because I don’t eat meat. So seafood and a lot of plant protein are essential for my diet.”

“Traveling the world and being a spokesmodel for my favorite sport.”

“Hold yourself accountable. If you know that you have been eating bad or drinking a little too much take that into consideration when planning your workouts or weekly eating habits.”

“Not being able to eat all the carbs and fattening food that I want.”

“I definitely make sure to have a cheat day.”

“At the end of the day, we are whoever we are and I don’t really have any other option. I work as hard as I can, this is the way I look and after that I can’t beat myself up over it. Hopefully everyone likes me for who I am. It was a struggle when I was younger, but now I’m older and you discover who you are.”

“Well, I take figure drawing classes every week, and the thing with figure drawing is it’s with a nude model. So, for me, it’s second nature, except for Playboy I was the subject. It was cool to switch roles.”

Brittney Palmer studied arts in college. She started her career as a dancer in the Jubilee before becoming a ring girl.