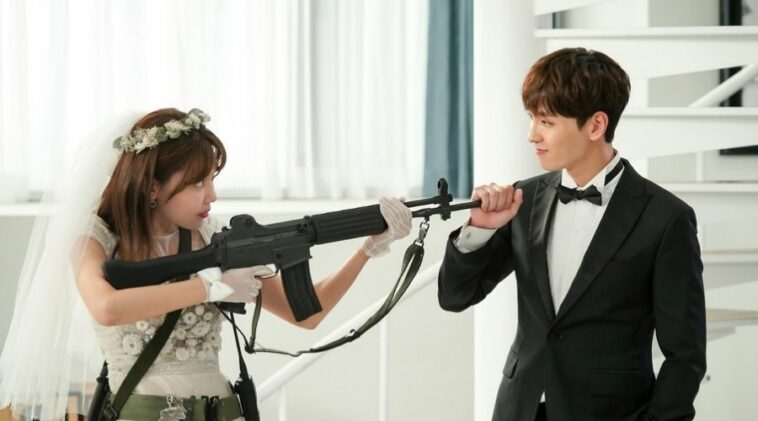 Actually, this drama is an adaptation of a novel written by Kim Eun Jung, Geuraeseo Naneun Antipaengwa Gyeolhonhaedda.

The script reading process made its place in previous August 2018.

So I Married An Anti-Fan is starred by Choi Tae Joon, Sooyoung, Hwang Chan Sung, and also Han Ji An.

Previously, Choi Tae Joon had starred in Suspicious Partner (2017) and The Undateables (2018).

So I Married An Anti-Fan was aired every Friday and Saturday at 18:00 KST on different networks, Naver TV, iQIYI, and Viki.

Synopsis of So I Married an Anti-Fan

A top superstar called Who Joon (Choi Tae Joon) lives his daily life with a lot of love from his beloved fans and supporters.

On the other side, there is a magazine reporter who wants to be successful in her career. That reporter is Geun Young (Sooyoung).

One day, they get involved with each other because of an accident, where Geun Young hit Who Joon with her shoes in a ceremony.

After this, Geun Young loses her own job as a reporter. She feels that this is because of Who Joon, so she starts to confront Who Joon’s management every day.

Because Who Joon has a lot of supportive fans, Geun Young’s behaviour leads to her new label as ‘Who Joon’s anti-fan’.

After becoming popular as an anti-fan of Who Joon, a production director offers him to be one of the participants in a reality show that has a concept about the living of a top star and an anti-fan.

Because Geun Young struggles financially, she accepts the offer. Accidentally, that reality show also contains Who Joon. The fight between them then starts.

Choi Taejoon as Who Joon

The top superstar in South Korea. He is handsome, talented, and has a cold appearance. Even so, he has really a soft heart.

A magazine reporter who wants to get to the top of her career. After becoming the anti-fan of Who Joon, her career path is ruined and she has to join a reality show to afford her life.

A CEO of entertainment management. He is rich and popular and also a close friend of Who Joon.

Han Ji An as Oh In Hyung

The next superstar and Who Joon’s ex-girlfriend.

So I Married An Anti-Fan Staff

Trailer of So I Married An Anti-Fan

korean dramaso i married an anti-fan