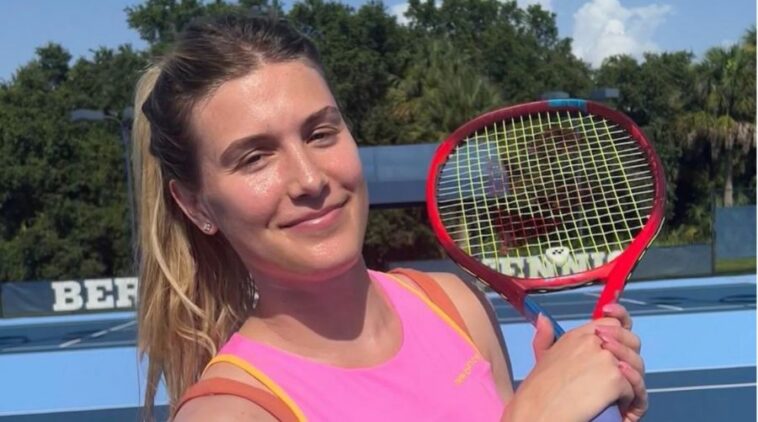 Eugenie Bouchard is a Canadian professional tennis player. She was famous as the first Canadian born to reach the final of Grand Slam in single.

Eugenie Bouchard started playing tennis when she was 5. She was a member of Tennis Canada’s National Training Center, located in Montreal.

She moved to Florida when she was 12 and attended a private school in Fort Lauderdale. She returned to Montreal for training when she was 15.

In 2005, she participated in the tournament Open Super 12 in Auray, France. She won the Canadian U-18 Indoor Championship in Toronto, making her the youngest winner of the indoor event.

She reached the semifinal of the junior Australian Open but lost to Yulia Putintseva. She won her first professional doubles title at the $50k tournament in Dothan, partnering with Jessica Pegula.

At Wimbledon in 2013, she beat Ana Ivanovic in the second round but then was eliminated by Carla Suárez Navarro.

She also played four seasons with World TeamTennis beginning in 2009 when she debuted in the league, the Kansas City Explorer.

Eugenie Bouchard and Jordan Caron, a hockey player, first spotted together going on vacation in Spain in 2017.

However, the relationship didn’t last long as in the same year, they had unfollowed each other on social media.

The relationship between Eugenie Bouchard and John Goehrke began when Bouchard predicted that Falcons would win the Super Bowl against the Patriots in 2017.

This prediction got responded to by Goehrke as a bet with Bouchard with a bet that if Patriots win they would go on a date.

The relationship then began as they also often went out together. However, they didn’t take it any further and made it a fling.

Bouchard was seen with investment baker Connor Davis on a Miami beach in 2019. As it was the first time the couple had seen together, however the relationship didn’t last long.

As Bouchard said during a lockdown in 2020 that quarantine would be more fun with a boyfriend, it hinted that the relationship has met it’s end.

Mason Rudolph is a quarterback for the NFL team Pittsburgh Steelers. Bouchard and Rudolph started dating in 2020.

However, the couple split in 2022. Despite their break up, they decided to remain friends.

Eugenie Bouchard’s net worth is around $6 million. Her main source of income was prize money from tennis tournaments and some endorsements likes those from Coca-Cola and New Balance.

“Sometimes you just want to get away and be normal for a few days. It’s a treat to travel without your racket bag.”

“I did not have a normal life. I’d be training when my sister would be at birthday parties and sleepovers. I finished high school by correspondence, basically working two full-time jobs. The last years were very, very tough. But I was willing to do that. It’s all about sacrifice.”

“Even when I was much younger, whatever I did, I wanted to do it to the best of my abilities. When I came home from school, I would be the one doing my homework while my siblings would be watching TV and putting it off until later.”

“Even if you’re the greatest of all time, people are not just going to give it to you. It’s a great lesson.”
I have very vivid dreams, and often – this happens to me at least a few times a week – I don’t know if something happened in real life or in a dream. I’m like, ‘Mom, did this neighbor come over, or was it a dream?’ And she’s like, ‘No, what are you talking about?’

“I’ve learned that it’s not a straight road to the top, and there are going to be setbacks along the way. You have to be patient, and you have to keep believing in what you’re doing. And keep believing in yourself, no matter what is happening. And then eventually you’ll get there.”

“Even the greatest player of all times loses sets or is down in a match. It just shows that, you know, a win is never guaranteed. It shows all of us that we have to work for every point, fight for every point no matter what.”

Eugenie Bouchard’s life centered around playing tennis and competing in tournaments. She’s been ambitious since a kid and her discipline is seen through how she finishes her homework right away.