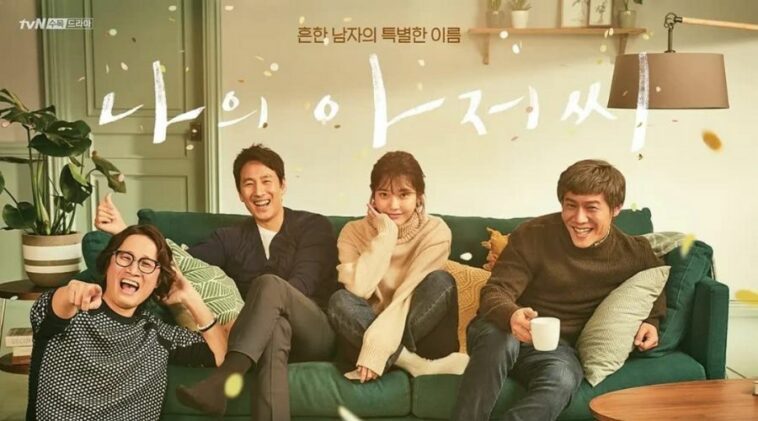 The popular Korean drama called My Mister was aired starting from March 21 until May 17, 2018 on tvN.

Originally, the character Byeon Yo Soon was supposed to be played by Na Moon Hee, but the plan was declined because there was a scheduling issue before Ko Du Shim replaced his place.

The character Park Sang Hoon originally also was supposed to be played by Oh Dal Su, but the production team replaced him with Park Ho San because of the controversial issue.

But the main characters are still original, which is starred by Lee Sun Kyun as the male lead and IU as the female lead.

Lee Sun Kyun had magnetized the audience for her main roles in Miss Korea (2013) and My Wife’s Having an Affair This Week (2016).

My Mister was aired every Wednesday and Thursday at 21:30 KST and replaced the previous tvN drama, Mother.

Synopsis of My Mister

This drama tells a story about middle-aged men and strong woman’s life. The highlight of this story goes to Park Dong Hoon (Lee Sun Kyun) and Lee Ji An (IU).

Dong Hoon is a 40 years old man who has a wife, Yoon Hee (Lee Ji Ah). But in reality, his wife cheated on him and wants to propose a divorce to marry Joon Young (Kim Young Min).

On the other side, Dong Hun also has a family contains his mother and two brothers, Sang Hoon (Park Ho San) and Gi Hoon (Song Sae Byeok).

Both of her brothers are very different. Sang Hoon is jobless, meanwhile, Gi Hoon has a dream to be a film director.

Lee Ji An’s life is also not quite different. She has to take care of her grandmother, getting into debt, and get harassed by Gwang Il (Jang Ki Yong). She is a worker in the same company as Dong Hun’s company.

She sees that there’s an affair between her vice president in her company with Dong Hun’s wife and makes an offer to Dong Hun that might be beneficial for both of them.

In his family, he is the second oldest son. His job is in the construction company.

He has a quiet personality but always wants to protect all the people he loves the most.

IU as Lee Ji An

A strong woman who has been facing a lot of tough times. She knows Dong Hun’s weakness as one of her boss’ tasks but later, she falls in love with Dong Hun.

One of Dong Hun’s brothers who has separated with his wife and doesn’t have a job.

One of Dong Hun’s brothers. He has a grand dream to be a film director.

People around Lee Ji An

People in the company

Trailer of My Mister