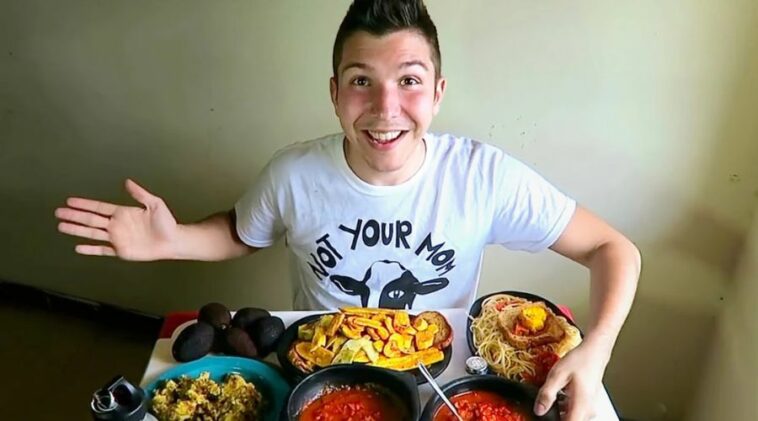 Nicholas Perry, or popularly known as Nikocado Avocado, is a Ukrainian-born American YouTube star who has been shocking his audience every time.

He was popular because of his vegan lifestyle initially, but he later decided to change his content to mukbang videos.

Because of his extreme content, he has successfully gained millions of fans from his online platform.

Unlike other people, Nikocado Avocado seems to have a different path compared to his fellow YouTube star.

Originally being an expert in music, especially the violin, Nik spent most of his teenage and early adult years focusing on art and music.

Nik even entered various art and music schools to smoothen his way in the music industry, which was proven by his previous education.

After graduating from college, he initially started his career as a violinist, but later he decided to try another venture.

In 2014, Nik opened his first main YouTube channel, particularly on 27th May. But his first video was released two years later in 2016.

During his early years as a YouTube star, he made various vegan lifestyles that contain a lot of healthy tips and vegan foods.

After being diagnosed with some diseases, Nik later transformed his channel to be a mukbang channel on which he often shows himself joining the extreme-eating trend in America.

Even though he got a lot of controversies about his content, Nik successfully gained millions subscribers and views from his videos and successfully earned a lot of wealth.

“I identify as skinny!”

“Why do vegans have to make everything about veganism? Why? There’s so much more to life than veganism.”

“My body seems very uncomfortable. Eating the amount I do has a very strong stopping point, and if I overstuff, I notice I don’t get hungry until later in the next day.”

“I have to lose weight for two years. I’m just not gonna do it. How about that?”

“That’s not the number one killer. Chips? No.”

“Am I destroying myself?”

“Say hello to my double chin.”

“I might have to put another pack of ramen in here.”

“So today I will be eating all five packs cus I’m very hungry thank you.”

“You are a disgrace!”

“Why are you crying? I should be the one crying!”

“And I was on that toilet and I had diarrhea for seven and a half hours.”

“I’m so upset this better be good.”

“You dead you died, you got diabetes, you have cholesterol and it’s a fleetees”

“I’m sending this to the police!”

“I’m hoping I’m praying that this is just water weight.”

“That’s not our number one killer.”

“Go away, you are ruining my show”

“Orlin, your jokes are getting old, no one likes them anymore.”

“My weight is a medical mystery.”

“Finding chairs that could hold my size was such a nightmare because I’m 350.”

“You know, I sit up here in my tower and watch everyone struggle and be poor. It’s so entertaining. I love watching poor people. They struggle. Oh, I just need popcorn. I could sit here and watch them struggle all day.”

“I don’t claim to be healthy. I don’t tell people to eat like I do. I don’t claim to be perfect. I almost always admit when I make mistakes. I don’t tell people what to believe, what to feel, or what to think. I’m not always happy, and yes, I have bad days like everybody else…Yet, people hold me on some kind of pedestal, expecting me to act as a leader. It’s not my obligation to be a leader. When I signed up for YouTube, I wanted to share my life, flaws and all. That’s it. I wanted to express myself and make people laugh. I wanted to share my personal experiences while also sharing my love for food. But again, it’s not my obligation to be a leader, and I hate when people act like I’m some kind of evil person when “straying away from my promises,” when in fact, I never made such promises. I’m not a leader or a politician; I’m just a regular guy.”

Even though Nikocado Avocado has many controversial things, he has already inspired many people to be the best version of themselves.