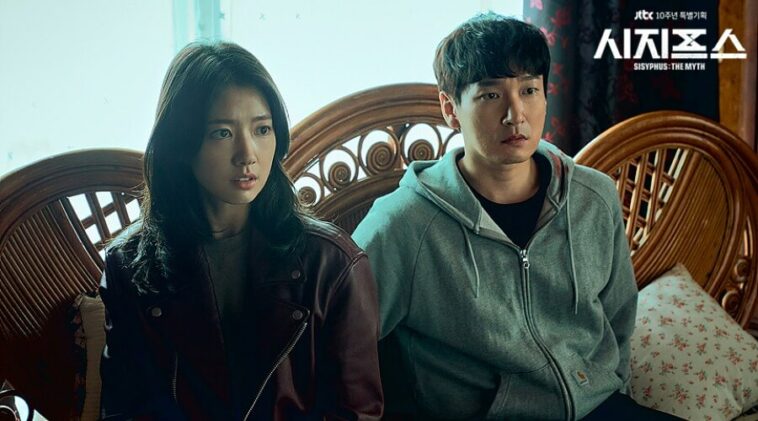 Even though the release period took its place in 2021, the filming process itself happened last year in 2020.

Previously, Park Shin Hye had starred in Doctors (2016) and Memories of the Alhambra (2018) before filming this drama.

Sisyphus: The Myth was aired at 21:00 KST every Wednesday and Thursday on JTBC to replace the previous JTBC drama, Run On.

Synopsis of Sisyphus: The Myth

Tae Sul is an incredibly awesome engineer. Besides, he also owns his own enterprise, Quantum and Time Company.

Not just genius and successful, he is also a handsome person. So many futuristic things that he has produced for technology development.

But unfortunately, his life isn’t that perfect as people imagine. His brother was dead ten years ago and one day, he wants to find the truth about the death of his brother.

On the other side, Seo Hae is a warrior from the future. She is able to beat the big man with her own hands, make some bombs, and doing sharpshoot.

They finally meet each other and start the dangerous journey.

A warrior from the future to save this world from the gigantic damage. She travels back to the past to prevent Tae Sul from doing an invention of the Uploader.

A handsome, genius, and successful engineer. He owns the Quantum and Time Company. Actually, he is an arrogant person, but after meeting his savior, Seo Hae, the rudeness in him fade out slowly.

Trailer of Sisyphus: The Myth