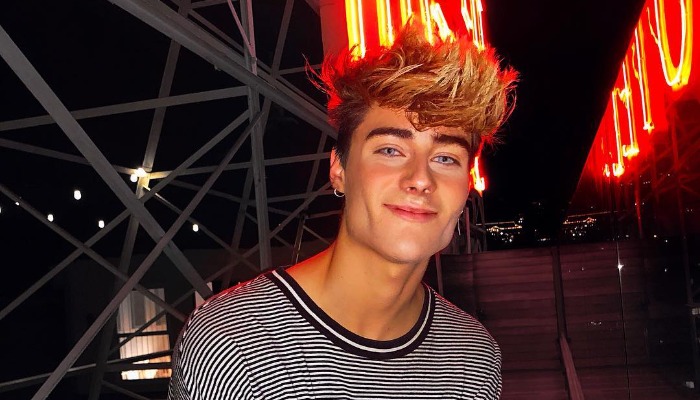 Sebastian Bails started his social media career on the app called Musical.ly, then combined it with Instagram content in 2014.

This social media star was also active on Twitter. He shared comedy videos, then started to do challenges, vlogs, and reactions.

After gaining success, his school magazine, Foothill Dragon press, featured his profile in October 2016 talking about being famous on social media.

One of Bails’s popular videos is when he swapped diets with his girlfriend at that time, Lauren Godwin.

His appearance on Godwin’s channel was also getting many views, one of them was when Godwin reacted to Bails’ private TikTok account.

When he joined TikTok, his popularity significantly increased. Bails got more than 10 million fans, and his videos were watched more than 2 million times averagely.

Throughout his career, Bails has collaborated with other internet personalities, such as Nick Pallauf, Jazmine Lucero, and Gavin Magnus.

2. Bails poses in front of his car, a white Mercedes

3. Sebastian Bails has a sharp jaw

4. His pose with a yellow cap and black jacket is cute

Sebastian Bails has built his social media empire across platforms, ranging from YouTube to TikTok and Instagram.