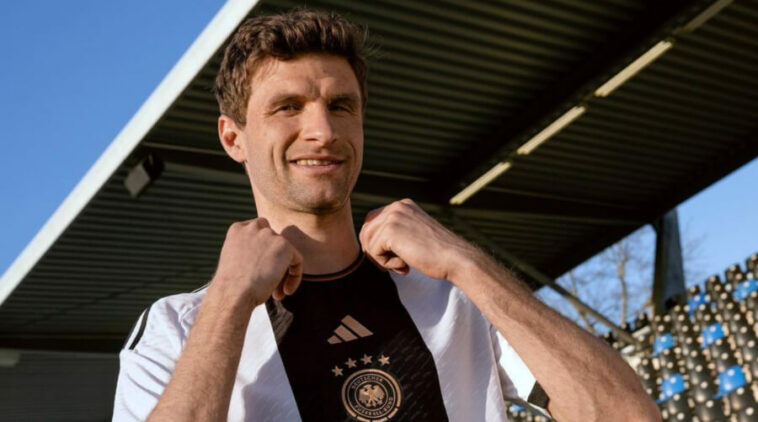 Thomas Muller was born in Wellheim in Oberbayern, a small town in West Germany. As a kid, he played football when he was at school.

His first youth team was TSV Pähl. In which he scored more than 100 goals in a season by himself. It remarks that he has shown his talent in football since he was a kid.

After spending some time with Bayern Munich’s youth team, he debut in the reserve team in 2008 in a match against SpVgg Unterhaching. On his first debut, he scored throughout the game.

He made his debut for the senior team in 2008, in a friendly match against Hamburger SV as a substitute for Miroslav Klose in the last minute.

He keeps scoring for Bayern Munich and brings the team to win the matches. Because of his performance, Bayern Munich kept extending his contract .

Aside from his club, he also represents his nation at various youth levels. He participated in German squad that began in 2004 when he represented U-16 team.

In 2009, he was called to represent U-21 team in a friendly match against Turkey. He was part of the German squad in the 2010 FIFA World Cup and became the top goal scorer in the tournament.

“I just try not to pretend to be something I’m not.”

“We are footballers, not artists.”

“Football is simple but very complicated.”

“I try to be available for the fans, but sometimes when I’m with my family, wife, and friends, I try to protect my private life.”

“You have to adapt and find your niche, in terms of the type of player you can become, both on and off the pitch. I always knew I’d have no chance against a 1.90m, 90kg defender in a duel, so the key is to avoid these situations altogether. You have to pick your space and time.”

“Usually, I’m a very positive guy. I try to think about the next chance, the next game, the next opportunity to play well.”

“There’s no club out there that is really a step up when you play for Bayern Munich. At most, you can join a club that acts at the same level.”

“There is no room for selfish behaviour at Bayern.”

“Whenever Germany lose or play badly, there are 1,000 reasons. And no matter how many questions there are, we will never make everyone happy.”

“You grow year after year with responsibility, and for me, it’s not important who has the armband but that everyone on the pitch gives the right signals.”

“The most important thing in Guardiola’s theory is to play football, and this always stays the same. The basic idea is always the same, but different opponents offer different space which you can use to play in.”

Thomas Muller has been with Bayern Munich since he debuted as a professional. He’s fond of Bayern Munich and found no other clubs appealing to him.