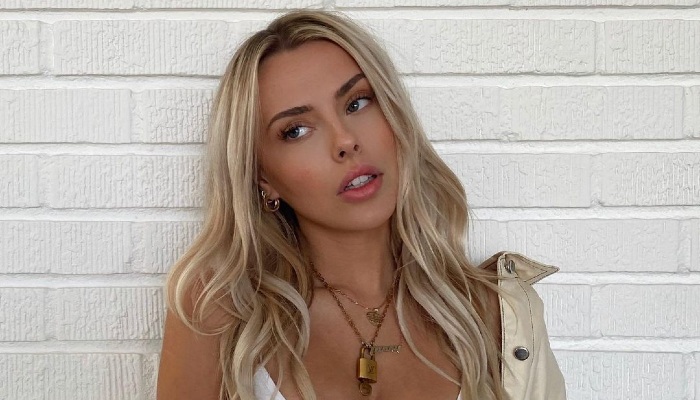 She made her first appearances in Dobrik’s vlogs in 2015 to create numerous types of entertainer content.

She quickly became part of the Vlog Squad along with other big-named YouTube star like Alex Ernst, Liza Koshy, and many more.

Her beautiful face and perfect figure earned her plenty of fans. She took advantage of it and launched her career in social media.

She also started her own YouTube channel in 2016. She mainly did shopping hauls, make-up tutorials, and vlogs on her channel. Unfortunately, she is not very active there anymore.

Instead, this YouTube star focused more on her gaming channel Corinna Kopf Gaming. She also does live streams on her Facebook page.

She plays many popular games like Fall Guys, Among Us, and Fortnite.

Her fans thought they would get exclusive content from her but were disappointed when Corinna re-posted pictures from Instagram.

This Sagittarius woman quickly defended herself by saying she would post exclusive pictures periodically.

Since paying attention to the internet, Corinna started rumors with many famous people. In 2017, she once rumored to be with blogger Brennen Taylor.

Brennen even teased about a pregnancy scare with Corinna with his viewers on his YouTube channel. However, the two never confirmed whether or not they were having a relationship was true or clickbait.

She was in a special relationship with Toddy Smith, who is also a YouTube star in the Vlog Squad members. Corinna and Toddy dated from 2017 to 2018 before announcing their split in April 2018.

In 2019, she was rumored to be dating Turner Tenney. However, there’s a need for clear information about their relationship status.

After her relationship ended with Toddy, Corinna dated Logan Paul. At the same time, they were both together in the Lakers game. Unfortunately, there’s a need for more information about the exact date they were together.

Despite Corinna and Toddy having to break up in early 2018, they started dating again after a few years. But according to their Instagram account, they have been together since 2019.

On December 2022, after celebrating her birthday in Miami, Florida, Corinna Kopf confirmed her new boyfriend on Instagram.

She revealed that she is dating Sammy Wilk. They were spotted together ion social media posts, kissing and hugging aboard a boat. They also shared the moment on TikTok.

Sammy Wilk has his real name as Samuel Wilkinson, is an influencer and singer-songwriter.

Previously Sammy Wilk dated Anastasia Karanikolaou, a friend of Kylie Jenner. They started dating in 2016 and separated in 2017.

Her net worth is estimated to be $10 million. Her wealth is earned from several jobs such as YouTube star, Instagram star, model, OnlyFans star, Twitch streamer, TikTok star, and brand endorsement.

According to the Social Blade, Corinna Kopf’s income on YouTube is estimated at $ 14 – $ 228 per month. In total, the estimated yearly earnings on Corinna’s channel are $171 – $2.7k

Corinna manages to earn between $23 – $373 monthly on her social media and between $280 – $4.5K on an annual average from AdSense and brand endorsement.

Later, on Impaulsive Logan Paul’s podcast, she revealed that she was making around $1 million every month despite having been active on the app for a long time.

“Everyday my body wakes me up before 7am and i can’t go back to sleep.”

“One of the reasons I feel like I stopped talking was because the internet probably believed something completely different me.”

“I definitely just aligned more with Facebook’s views, i know for sure that Facebook Gaming and Mixer is more consistent when it comes to terms of service, their rules, policies and everything.”

1. Corinna has simple but cool style

2. Love her in darker colors

3. She can also rocks light colors

4. She is the queen of cute mirror selfie

5. Corinna posing with her adorable dog

Corinna Kopf always provides great and fun contents for her audience. No wonder so many people have become fans of her.