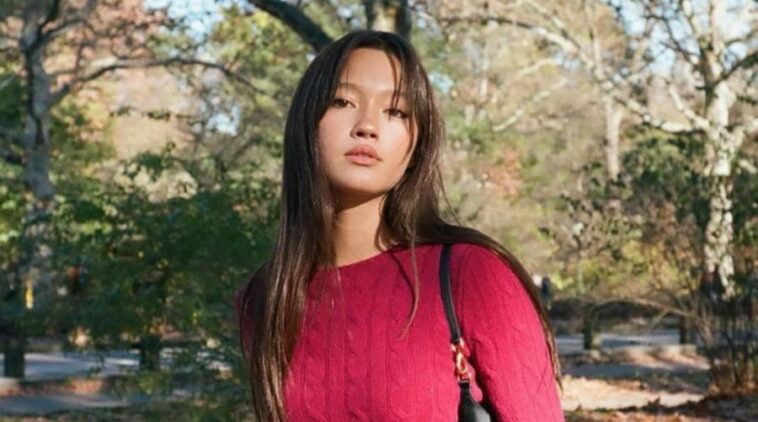 Lily Chee is an American model, actress, YouTube star, and TikTok star, who was born in Atlanta, Georgia. She has attracted people since her appearance as young Elektra in Daredevil.

Lily Chee began her modeling career at the age of 10. She scouted by model agency Wilhelmina when shopping with her father.

Not long after she scouted, she got offers to became a model for different reputable brands like Calvin Klein, Old Navy, Target, Dior, and Tommy Hilfiger.

From her modeling career, she gained a lot of attention and could make a debut screen. Her first screen debut was Daredevil in 2016, where she played as young Elektra.

Aside from her career as an actress and model, she also updates about her life through a vlog on her YouTube channel.

She never publicly sharing about her relationship status. She rumored dating actor and model William Franklyn Miller after the two shared photos of them together on Instagram.

Lily Chee’s net worth is around $1.5 million. She got her net worth through various projects, modeling, and partnerships on her social media.

“One of my dream video ideas would be to go to Asia and do a nice Vlog there.”

“Something I’ve been wanting to do for a few years is a storytime video on how I got to where I am today. That’s something a lot of people have asked me about so I’d love to talk about how I got started because maybe it can help inspire someone else who might want to take up modelling, acting, or social media.”

“I have been in the industry since I was nine years old, so I’ve learned to balance things out of sheer experience.”

“Having supportive friends has really helped me stay grounded.”

“I might have a lot of supporters and followers — but that’s not a measure of fame.”

“Through acting and auditioning for roles I’ve become really good at handling rejection.”

“I’ve learned from a very young age to pick myself up and move on from it without getting hung up on things.”

“I’ve learned to never respond to negativity. What matters is that you know yourself.”

“For some reason, they look up to me and think of me as inspiring, and this makes me so happy and makes me feel like whatever I’m doing with my life is worth something.”

“How I cope is simply by taking a break and resetting.”

“Just remember to be proud of your ethnicity and heritage. Don’t let anyone — particularly random strangers who know nothing about you — tell you how to feel about your race.”

“What I’d say is just be yourself because people are interested in your genuine personality and identity.”

Lily Chee grew up in a supportive environment who supported her passion and helped her learn through her experience as a model, and actress.