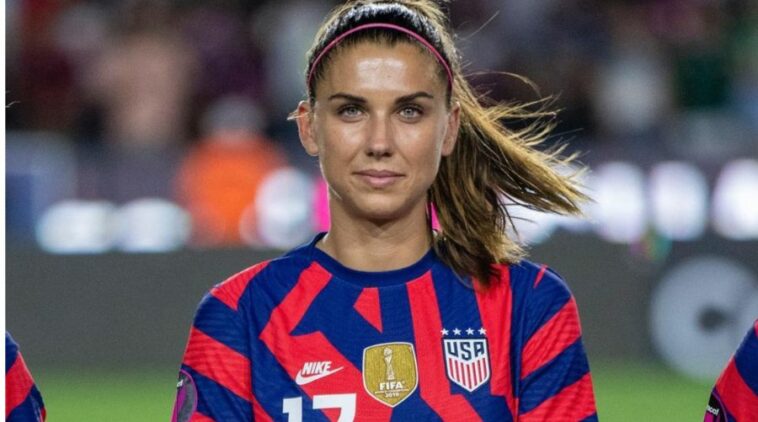 When she was a child, Alex Morgan tried multiple sports and was not focusing on one. She wasn’t focused on football until she was 14.

When she was 14, she joined Cypress Elite and helped the club won the Coast Soccer League U-16 Championship and placed third at the U-19 level.

She then attended Diamond Bar High School and became a three-time all-league pick whose name was listed as in NSCAA All-American.

She went to pursue her degree at University of California and in her college year, she led California Golden Bears to the NCAA Tournament in the second round twice.

After she graduated from college, she made her professional debut as she was drafted number one in the 2011 WPS Draft by Western New York Flash.

Unfortunately, WPS suspended its operation due to legal and financial difficulty. In 2012, she then joined Seattle Sounders Women for the 2012 season.

She scored two goals and served two assists with 253 minutes on the pitch during her year with the Seattle Sounders Women.

For the next season, she joined Portland Thorns FC and scored her first goal for the club in a match against Seattle Reign FC.

She spent the 2014 and 2015 seasons with Seattle Sounders Women before moving to Orlando Pride in the 2016 season.

After making 15 appearances during the 2016/17 season in Orlando Pride, she signed with Lyon in 2017 and made her debut for Lyon in matches against En Avant de Guingamp.

In the same year, she scored a hat-trick against Rodez and helped Lyon get to a semi-final at the French Cup.

After spending a season with Lyon, she made her return to the Orlando Pride and extended her contract to the 2019 season and because of her pregnancy she missed the 2020 NSWL Challenge Cup and the football event put to a halt due to Covid-19 pandemic.

She signed with Tottenham Hotspur in 2020 but couldn’t play for the club until late 2020 because she still regained her fitness after giving birth in the middle of 2020.

She ended her contract with Tottenham Hotspur and returned to Orlando Pride for the 2021 season. The next season, she signed with San Diego Wave FC.

Alex Morgan is also involved in her nation’s team many times and her first appearance for U-20 team was at the 2008 CONCACAF Women’s U-20 Championship.

Alex Morgan was also the part of United States team at the 2008 FIFA U-20 Women’s World Cup that was held in Chile.

“There’s those young girls that I once was, looking up to Mia Hamm, Christine Lilly, all those players, and I know how much of an effect they had on me. Knowing that, I feel like I’m in a position where I can really help be a positive influence in girls’ lives.”

“To force a change, sometimes you need to stand up. You know what you’re worth – rather than what your employer is paying you.”

“I don’t really have many regrets. I did miss a lot of the events in the days leading up to my sister’s wedding because I was at a U17 camp. There were moments like that growing up when I felt like I focused too much on soccer. But that’s probably the reason I am where I am today.”

“I rarely felt or noticed any real divide between girls and boys when I was growing up. Maybe it was because I was so involved in sports and competed with the boys. Maybe it was my mom and dad, who constantly instilled confidence in me and never made me feel as though there were boy activities and girl activities.”

“When I prepare for a match, it’s like work, even the way I have to shower and put on my makeup.”

“Whenever people say ‘women’s soccer,’ I want to correct them to say ‘soccer.’ Every girl has had their sport diminished because they’re girls.”

“I’m not gonna sugarcoat it: It sucks to lose sometimes.”

Alex Morgan makes her debut after finishing her college, representing her nation in the FIFA World Cup Women and many tournaments.