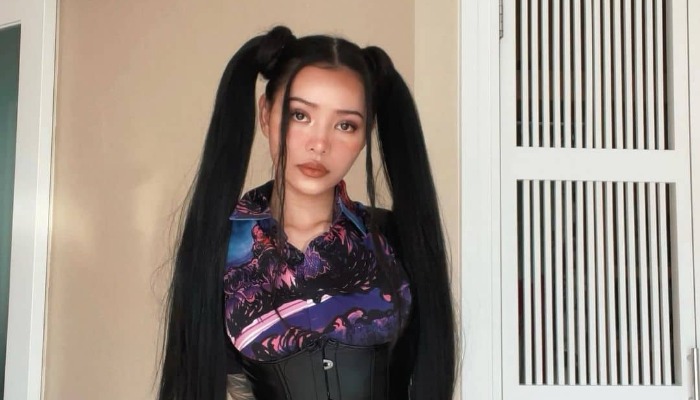 Denarie Poarch or best known as Bella Poarch, is an American-Filipino TikTok star, singer and YouTube star. She was famous after the video of her playing M to the B became viral.

Bella Poarch started reaching her fame when she uploaded her lip-syncing videos on TikTok. One of the videos playing M to the B by Millie became viral. It became a video that got the highest number of likes on the platform.

She often uses stuffed toys for her videos. By doing so, she frequently received hate comments saying that she only acted cute to attract men and her facial expressions were cringe. However, she went on creating videos on the platform.

Poarch also worked with some brands, such as Moncler, Valentino, and RIPNDIP.

In March 2020, she created a YouTube channel with her own name. The channel got more than 200,000 subscribers even when she had not uploaded a single video.

She had gained a trope from millions of followers. Thus, she launched her first merch, a black hoodie, in November 2020 for her fans.

The hoodies were only made of 300 items. It also came with her cute photoshoot.

Before her fame, Bella was reportedly dating a man who worked in the U.S Navy. They eventually broke up and the identity of the man also became unknown.

Bella and EDM artist Sub Urban were linked after they released their song Inferno and promoted it through various platforms. Sub Urban is also credited in Bella’s debut song but the truth is not coming to surface as both parties neither confirm nor deny.

There rumor involved her dating rapper Tyga also left an impression on her love life story. She and Tyga were spotted in TikTok videos together and it was reported that the videos were taken at Tyga’s house.

The videos fueled the rumor and it even said that there’s a sex tape between them. Both Tyga and Bella didn’t respond to the rumor, however, Bella denied the rumor through a TikTok challenge in which she was required to share two truths and one lie.

Bella married Tyler Poarch in secret for about four years from 2019 to 2022. In the span of four years she never wore a wedding ring in public nor talked about her husband. The public got a grip on her relationship when she revealed that the marriage was over.

Bella Poarch net worth is around $12 million. Her source of income came from TikTok, Instagram, and collaboration with several brands.

Bella Poarch’s fame in TikTok was undeniable. She topped three as the most followed person on TikTok. Due to her fame, she often makes sponsored videos and each video, she gets paid $30,000.

On Instagram, Bella shares pictures of herself as well as sponsored pictures she makes deals with several brands. For each post, Bella got paid between $13,000 to $23,000.

One of the ways Bella spent her wealth was to buy luxury cars. She bought Porsche Panamera worth $305,000. She also owned Land Rover Discovery worth $175,000.

“I was my own role model”

“My scars from abuse made me insecure. And so I had to cover up my scars with tattoos.”

“I feel like there’s a tremendous amount of pressure that society and the internet put on people to look or be perfect.”

“Growing up in a brand new country, coming from the Philippines, was hard. I was treated differently and felt like people thought less of me because I was Asian”

“In the military, I had to do my hair every morning. I had to put it in a bun and I can do it in two minuts easy. The military also taught me how to be perfectionist. Everything has to be perfect.”

1. She wears a black dress

3. Her black and mysterious dress contrasts with the cute big doll

5. Bella goes extra with her makeup

Bella Poarch is a breakout TikTok star that makes fun and creative videos on her social media. You must follow her!