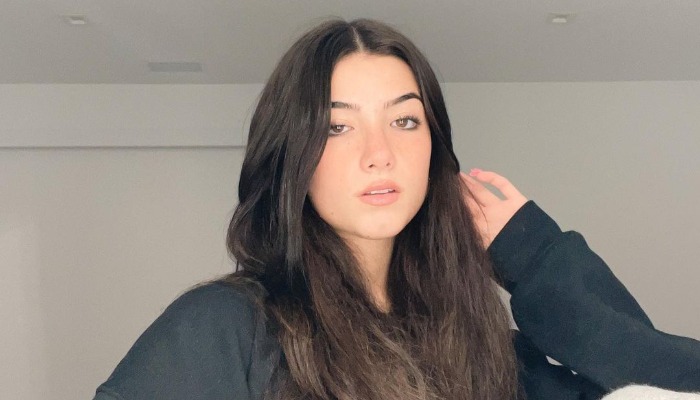 Charli D’Amelio is an American TikTok star, YouTube star, actress, singer and dancer. She is famous because of her dancing and choreography along with becoming the most followed people in TikTok.

Before Charli D’Amelio became famous on TikTok, she was a pro dancer. She started dancing at the age of 3 and competed when she was 5.

Charli reached over 5 million followers within 6 months because of her energetic and silly dance choreography.

At the beginning of 2020, she and her family signed a contract with United Talent Agency.

She was also a part of Hype House, where several TikTok influencers live together in a mansion, but she left the group in 2020, along with her sister, Dixie D’Amelio.

Charlie also became the first TikTok star to appear in a Super Bowl commercial in 2020. The woman was invited to encounter famous singer Jennifer Lopez.

She is the first person who got 100 million followers on TikTok. In the same year, Charli voiced a character named Tinker in StarDog and TurboCat, an animated movie.

At the 2020 Streamy Awards, she won Breakout Creator. She was also nominated for Social Star for the People’s Choice Awards.

Throughout her career, Charli has collaborated with many famous brands, including Morphe Cosmetics, Dunkin’ Donuts, and Triller.

Her rumor of dating TikTok star and singer Chase Hudson comes when in late 2019, fans spot them sharing a smooch. They were dated for a year before they parted ways in early 2020 and remain as a friend afterward.

Charli publicly shared the breakup and said that the hardest part about having a public relationship is that their relationship publicized anywhere and they way people judged.

Charli knows Landon Barker through her sister Dixie D’Amelio. In June 2022, they both were spotted holding hands in New York City and they later made their relationship public through Instagram.

When it was announced that she was gonna competed in Dancing With the Stars, Charli said that Landon has supported her and by her side the whole journey.

Charli D’Amelio net worth is around $20 million. Charli’s source of income aside from her TikTok comes from YouTube, merch, and from her job as an actress.

Charli makes sure she makes good use of her platform with millions of followers. Aside from posting content about her dancing, she also does advertisements on her TikTok account.

She makes deals with many brands and charges a minimum of $100,000 for one sponsored content in her TikTok account.

For one sponsored video, she charged the same amount as in her TikTok account which is $100,000 per video. She also earned some money from ad revenue which contributed to her wealth.

Charli has breached her career as a TikTok star to become an actress. She has lent her voice to the animated film Stardog and TurboCat.

She also has a deal with Hulu to appear on reality show The D’Amelio Show that is based around her family.

Gaining a lot of net worth didn’t make Charli a greedy person. She is a philanthropist and is known for donating her money to various events.

She once donated $100,000 to the American Dance Movement to help dance education across the United States.

She also donates $50,000 to Norwark Hospital during the pandemic of Covid-19.

As for herself, she has moved her family to Los Angeles home worth $5.5 million which the sister pays rent as much as $35,000 a month.

“We’re all kind of thinking the same things just in different ways.”

“Doing as much as we can while we have this opportunity.”

“It’s our everyday lives, our true emotions and feelings and just following our lives and our story.”

“I’m just so thankful to have them be such supportive parents when this is something so new to me, but also so new to them.”

“You just have to be authentic. You can’t fake a smile. You have to do what you actually enjoy.”

“I get self-conscious and I get insecure, as everybody else does, but I try not to show that.”

“I think I’m working on being a lot more positive in my everyday life because I realize comments and things can hurt.”

“I once saw a TikTok beauty hack about taking a hot bowl of water and using it to steam your face. I tried it, and it feels so good.”

“I feel like no one really gets to see, but, people are always talking about how they think our family dynamic is pretty cool.”

“As a society, we definitely need to be more careful with our words and make sure we are treating people with kindness.”

“STOP TALKING ABOUT MY BODY! It’s not your place to tell me if I’m losing weight or gaining weight.”

“Something I would have never thought that I could have done before is dancing in front of thousands of people. It changed how people view me in a negative and a positive way.”

“A couple of years ago I decided that my dream is to dance with J.Lo. She was on top of my dreamboard and I’ve talked about her in almost every interview I’ve done, whenever they ask what my biggest dreams are.”

“I’m trying to show people that I’m a person, and I deal with the same things as you guys, and I’m trying to make the best of it.”

“So many people can see my content and see that I dance and maybe it’ll draw them to my Instagram where I have longer clips of me and dance classes or improv.”

“I’ve just been taking care of my skin even more since I have the extra time at home, which makes it really easy to commit to my routine. I’ve also been trying new things, including makeup for days I want to do a little more.”

“I’ve definitely gotten more confident about showing my natural skin – even during breakouts. I’ve actually learned that a lot of people don’t love their freckles, but I’ve learned to love mine.”

“When you have opportunities that are so amazing but then an entire world of critiques for your every move, it’s very difficult to find enjoyment in things that are torn down so much. It’s extremely difficult to want to continue doing something that people say how much they hate. “It’s hard. It doesn’t feel like it used to, where there were collaborations and fun and everyone was friends.”

2. She seems cute with that comfortable outfit

4. What do you think of her magenta hair?

Charli D’Amelio inspires other people around her age and beyond that fame can be gained as long as we are creative and passionate about what we are doing.