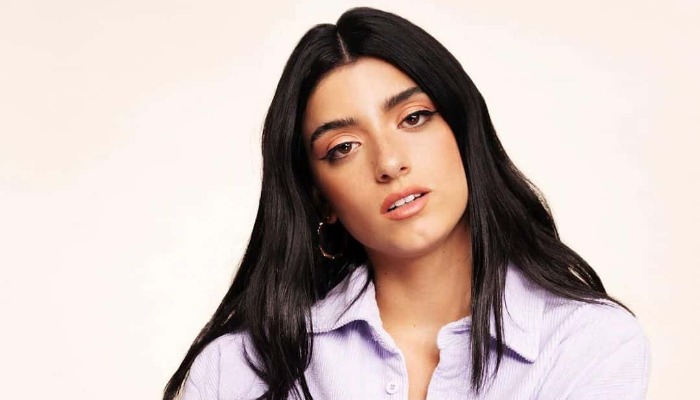 Dixie D’Amelio is an American TikTok star, YouTube star and singer. She was famous because of her video on her TikTok account.

Before Dixie D’Amelio gained fame from TikTok, she was a BMX racer when she was 5. Thus, she was a regular teen who attended high school until she joined TikTok in 2019.

Her videos became viral and many people followed her account. Along with the members of the D’Amelio family, she signed a contract with United Talent Agency in January 2020.

In May 2020, Dixie also got a podcast deal with Ramble Podcast Network that talked about her life.

Next, she starred in the web series Attaway General, along with other social media stars like Griffin Johnson, Madi Monroe, and Diego Martir.

Then, she released her debut single titled Be Happy in June 2020. Its music video received about 10 million views within a day and got millions of streams on Spotify too.

At the end of 2020, she also created a series on her channel named The Dixie D’Amelio Show.

Throughout her career, Dixie collaborated with many brands, including Morphe Cosmetics, Chanel, and Hollister Co.

In 2020, she is known dating TikTok star Griffin Johnson. This relationship was confirmed by Griffin himself. Things went well until July 2020, she unfollowed Griffin and she posted a video entitled “My Last Date with Griffin” in August 2020.

Upon breaking up with Griffin, Dixie began to hangout with Noah Beck until fans assumed that they were dating.

Dixie and Noah started dating in September 2020 but didn’t make things public until a month later.

She broke up with Noah Beck in November 2022, after months of rumors of the couple’s affair.

She was rumored to be dating David Dobrik. But many fans don’t like the rumors of their relationship.

Dixie D’Amelio net worth is around $10 million. Her source of income mostly comes from TikTok, YouTube, and endorsement.

Just like her sister, Charli D’Amelio, she was listed as the third highest earning TikTok user behind her own sister and Addison Rae.

She is able to make good use of her platform and get paid from the views of her content on TikTok. In 2021, her income from TikTok was around $4 million.

Since she is still young and her fanbase keeps growing, this number could increase more.

Dixie also has a strong fanbase on YouTube. Through videos she uploaded in YouTube, she could monetize her video and gain ad revenue. In 2021, her earning from YouTube is estimated at $2 million.

Dixie earned more than her peers. From her wealth, she spent it on buying some luxury cars. She has a collection of Porsche 911 which is worth $280,000. She also owns Land Rover Discovery that is worth $175,000.

Aside from spending her fortune on buying cars, she also spent her wealth on a house. Along with her sister, she moves her family to Los Angeles home worth $5 million. She also hired a personal chef for her family.

“I knew everything was eventually going to be better.”

“[The show’s] our lives, it’s our mental health, it’s our emotions,”

“At the end of the day, when you’re unhappy with your own life, you don’t care about anything”

“I try to show my actual self, because that’s what people want to see on the internet, but I can’t”

“We have no idea what we’re doing, but I mean, I think it’s just cool to be able to see our journey and how, like, every day we wake up and learn something new”

“I was a person when I was at my old school who I did not like. I was not myself, because I had so much anxiety and everything going through my brain at the time where I couldn’t even have a proper conversation with anyone”

1. Her bright smile is head-turning!

2. She looks cool with the white coat and layers of necklaces

4. What do you think of this suit?

Dixie D’Amelio was born to be famous! She is multi-talented as she has become a model, singer, and actress.