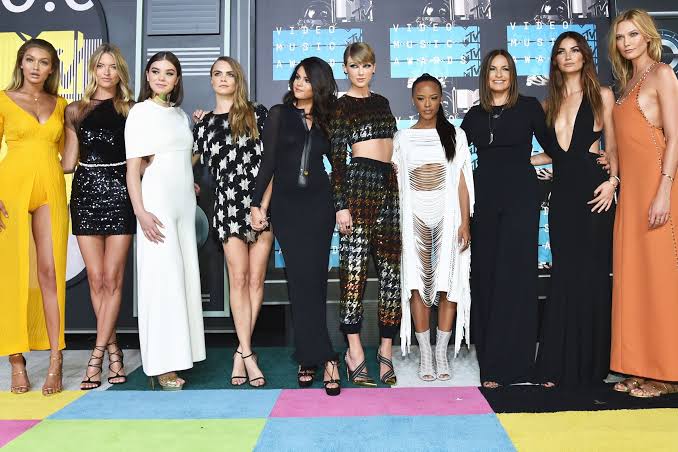 Taylor Swift always tries to make a friend because she is hurt to be asked about her relationship with men. She’s making friend with some celebrities, singers, models, actresses, and actors.

Somehow, some of her besties were joined in her model video clip Bad Blood like Selena Gomez and Cara Delevingne.

They hang out together and spent time on special days such as Halloween. However, some of Taylor squad seems to have a problem or telling that they are not that close.

Here are the list of Taylor squad and their relationship nowadays.

One of Victoria’ Secret Angel, Martha Hunt is one of Taylor best friend. They met at the Victoria Secret Fashion show in 2014.

Selena and Taylor are close friend for 12 years. They know each other because both are in relationship with Jonas brothers.

Selena was dating Nick Jonas and Taylor was with Joe Jonas. Selena and Taylor support for their career. Moreover, in Taylors’ 28 birthday Selena shared video about them.

Cara Delevigne one of Taylor loyal friend. She even answered Justin Beibers’ post in Instagram about Taylor and Scooter Braum problem.

Cara said that Justin actually did not know the condition of Taylor and asked him to still remain instead of making it worse.

Serayah McNeil is one of Taylor squad who joined in her music video. In one interview, Serayah  told about her relationship with the squad.

Read also: Having Mental Health, 10 Celebs Open About Their Condition in Public

Zendaya decided to out from Taylor squad since Taylor had problem with Kanye. She found out liking tweets of Kim about she was out from squad.

Ellie Goulding and Taylor seemed not close anymore because Ellie was hangout with Katy Perry and Lorde.

After Ellie posted picture about her and Katy Perry, Ellie deleted the picture. KatyPerry and Taylor were best friend before they have problem, but Katy and Taylor already made up when Taylor sent blanket to her daughter.

Gigi Hadid is one of Taylor best friend until nowadays. She always joined Taylor concert and supported her.

They met on Victoria Secret Fashion Show. When Gigi has a baby, Taylor sent a pink blanket to her. In her birthday, Gigi joined her birthday with some of squad members.

Hailee Steinfield also joined model video clip of Bad Blood, however Hailee said that she and Taylor were not that close as what actually appeared in media.

She said that they were good friend but she had refused to call as a squad member of Taylor.

Taylor squad is one of incredible celebrities group and many people adore how they looks amazing together. Interested to join?