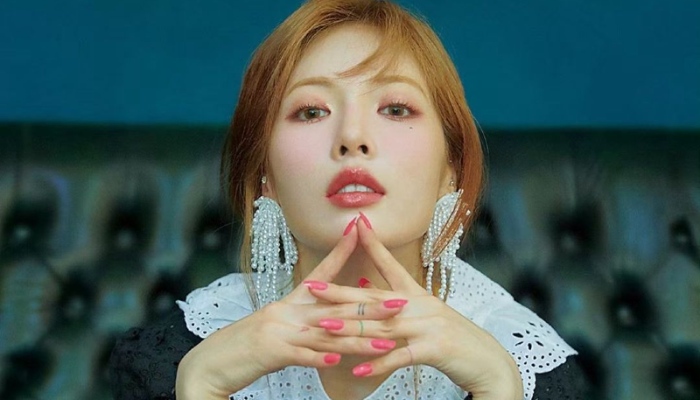 HyunA wanted to become an actress at first. At just 7 years old, she went on 50 auditions but failed in all of them. This Gemini girl then tried out for JYP Entertainment and passed the audition.

Under the management, HyunA started out as member of girl group Wonder Girls.

The group made their debut on MBC’s Show! Music Core in 2007. They performed the song Irony from their first album The Wonder Begins.

Unfortunately, HyunA’s time in Wonder Girls was short-lived. Her parents took her out in July after some worrying health issue.

In 2008, the girl from Seoul returned to the entertainment industry by joining Cube Entertainment. HyunA became a member of new girl group 4Minute.

The group released first single Hot Issue on June 2009. Over the next seven years, 4Minute continued to release 19 more singles.

They had also released 2 studio albums, 1 compilation album, and 7 EPs.

In the meantime, HyunA had also started her solo project. This Gemini girl released the song Change in January 2010.

Her big breakthrough came with the release of her first EP Bubble Pop! in 2011. The title track under the same name was a global success.

It became the first ever music video by K-pop artist to reach 100 million views.

On June 2016, 4Minute was disbanded due to contract issue. HyunA was the only to renew and continue to work with Cube Entertainment.

Other than focusing on her solo career, this singer also became part of Triple H. She joined Pentagon’s Hui and E’Dawn. Together, they released two EPs 199x and Retro Futurism.

In 2018, rumor about HyunA and E’Dawn relationship emerged after a photo of them together was released.

Cube Entertainment denied it, but the couple confirmed it through Yeonhap News. This caused the label to cancel all Triple H’s activities and eventually terminate HyunA’s contract.

This Bubble Pop! singer then went on to join Psy’s label P Nation. In November 2019, she released the single Flower Shower.

HyunA then made a comeback in January 2021 after several years of inactivity. She released her seventh EP I’m Not Cool.

2. Strolling around the city in stylish winter outfit

4. What a cute candid photo

HyunA has made a name for herself in the music industry for years. And it looks like she would still be here for years to come.