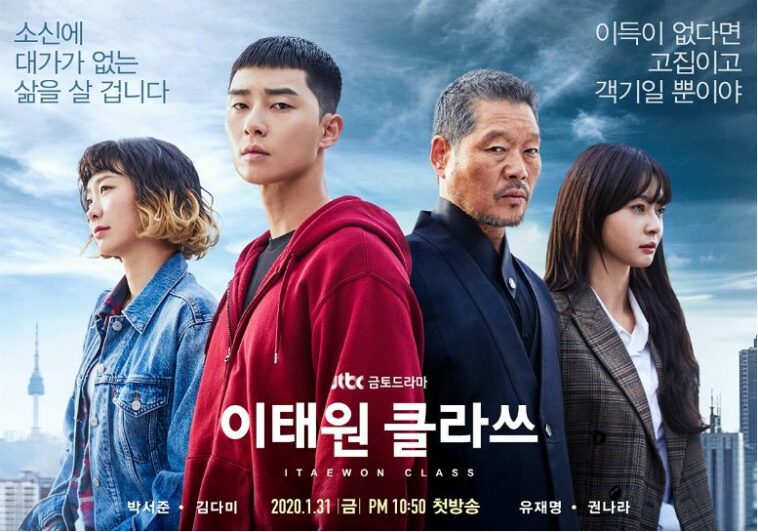 This drama is an adaptation from a webtoon written by Jo Gwang Jin, Itaewon Class. Itaewon Class was also the first drama project which was produced by Showbox.

Itaewon Class was aired on JTBC every Friday and Saturday at 23.00 KST and replaced a drama called Chocolate.

Itaewon Class story begins with the impulsive action of Park Sae Ro Yi (Park Seo Joon) when he was still in high school.

He gives her classmate, Jang Geun Won, a punch because he bullies his classmate. Unfortunately, Geun Won is the son of the rich CEO, Jang Dae Hee.

Jang Dae Hee owns Jagga restaurant, a company where Sae Ro Yi’s dad works. Because of this incident, Dae Hee wants Sae Ro Yi to apologize to his son, but he refuses.

His decision then leads to two bad impacts; he got expelled from his school and his own father lost his job.

One time, Sae Ro Yi’s dad dies because of an accident where is the perpetrator is Jang Geun Won. This makes Sae Ro Yi gets very mad and beats him.

Sae Ro Yi later gets into prison. After he is released, he builds a restaurant. A social media influencer, Jo Yi Seo (Kim Da Mi) joins him and later she gets a feeling for him.

An impulsive and strong fighter. After getting released from a prisoner, she builds a restaurant in Itaewon, DanBam.

She is a manager of DanBam. An intelligent, multi-talented, and famous girl on social media. Previously, she lived in New York but she moved to South Korea.

After working at DanBam, she falls in love with Sae Ro Yi.

The CEO of Jangga Group company. He is really a hard worker, powerful, and has strong authority.

The head of Jangga Group’s strategic planning division. She was a classmate of Sae Ro Yi and his first love.