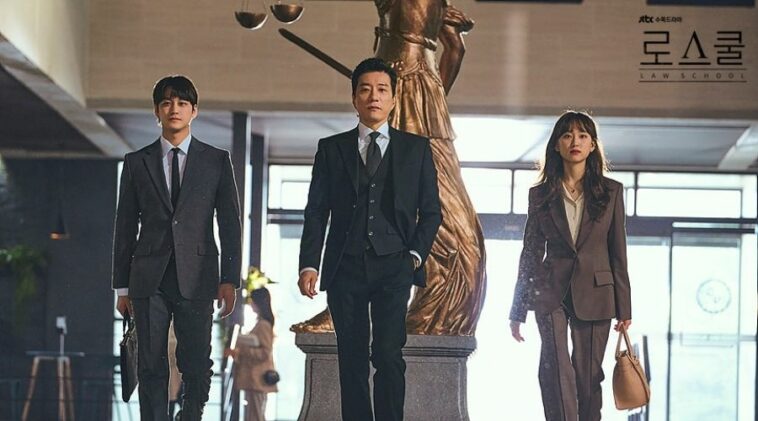 Kim Myung Min previously became the main actor for several Korean dramas, such as A New Leaf (2014), Six Flying Dragons, and Miracle That We Met (2018).

Meanwhile, Ryu Hye Young had starred in the Dear My Room drama in previous 2018.

Lee Jung Eun also had starred in a drama called Once Again (2020).

Law School was aired on JTBC every Wednesday and Thursday at 21.00 KST. This drama replaced the schedule of Sisyphus: The Myth.

This storyline in this drama started when there is a professor at the law institute, Yang Jong Hoon (Kim Myung Min), who is suddenly gets involved in a legal issue.

Because his personality is cold and straightforward, so many students don’t like his style, but actually, Professor Yang also doesn’t care about his students’ opinions towards him.

Two of his students in the first year are Han Joon Hwi (Kim Beom) and Kang Sol A (Ryu Hye Young).

Kang Sol A is a student who comes from a low economic background. Meanwhile, at her institute, her friends come from wealthy families and have smart brains.

This condition makes her feel insecure about herself. On the other side, her friend, Han Joon Hwi is a top student who is attractive and has strong leadership skills, but he owns a deep secret.

Formerly, he was known as a prosecutor. But after there were some things happened, he changes his career to be a criminal law professor.

A first-year student with high spirit and empathy. Even though she doesn’t own a very smart brain and comes from a wealthy family, she always gives her best shot.

An attractive and smart top student at the law institute. He always gets the top grades for the examinations.

Formerly, she was a judge but she turned her career path into a civil law professor.