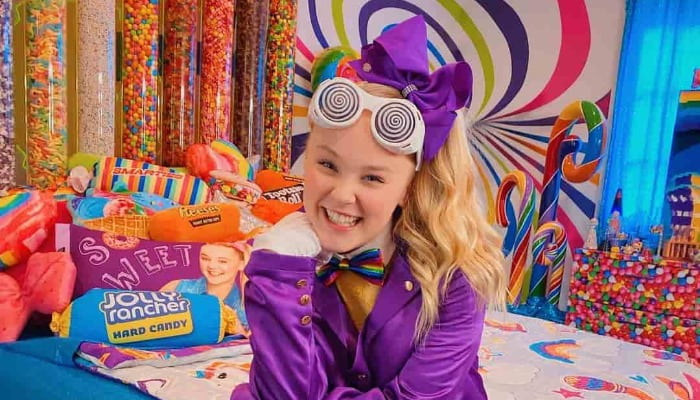 Jojo Siwa is a famous Internet star that has built her career at such a young age. She became one of the contestants at Abby’s Ultimate Dance Competition when she was 10 years old.

Then, she started performing on American TV shows like The View and Good Day L.A. from 2014 to 2015, Jojo appeared in a reality show titled Dance Moms and this was her quantum leap.

A year later, she launched her first official single named Boomerang. Its music videos got millions of views and led her receive the Breakout Artist of the Year from Vivid Seats.

In 2018, Jojo announced her concert tour named D.R.E.A.M. The performances took place worldwide, including the UK, Australia, and Canada.

In the same year, she started her film debut in Blurt! and voiced characters in The Angry Birds Movie 2 in 2019.

Jojo has become an idol for younger ages audience. In 2017, she won Favorite Viral Music Artist from Nickelodeon Kids’ Choice Awards and Favorite Musical YouTube Creator a year later from the same award.

“I just always wear bows. I always love bows, and it’s always been my thing.”

“By the time I left ‘Dance Moms,’ I’d made so many friendships.”

“We do it better when we’re together.”

“Dancing and singing are the two things that have stuck with me throughout my life.”

“I’ve always kind of just had a big personality and a voice that I wanted heard.”

“I don’t let the haters get their way.”

“Something’s going to happen and I think it’s really big.”

“They got nothing on us.”

“Every girl’s a super girl.”

“Dance Moms’ was one of the best experiences I’ve ever had in my life!”

“I have experienced a lot of online bullying because I am homeschooled.”

“I get bullied a lot on social media, and it’s terrible.”

“My thing with failure, just forget about it and get up and do it again.”

“If there’s someone getting picked on, be nice to them and be helpful to them.”

“Everyone should just be kind to one another.”

“I really love Meghan Trainor and how she doesn’t care what people think about her.”

“Won’t let the haters get their way. I’mma come back like a boomerang.”

“I carry my camera with me everywhere. I’m a vlogger!”

“I just want to make people happy and make a difference in people’s lives.”

“I feel everyone should feel empowered to live their best life.”

“Something’s going to happen and I think it’s really big.”

“Grey’s Anatomy’ is by far, by a landslide, my favorite show.”

“People call me energy in a bottle.”

“I wake up saying every day’s another chance to rock it.”

“We always dressin’ up, it’s better with some glitter on it.”

“I think that is very important to me, that everyone loves everyone.”

“I really have been dancing my whole life.”

“I think going on tour, having lots of songs and music videos would be super cool.”

“Boomerang’ is all about coming back from the hate and not listening to the hate. It really tells a message.”

“MeToo is a strong movement in Hollywood, but a lot of my fans and demographic are younger, and they don’t really understand what’s going on with it. I wanted to put something out for them, even for those who are 4 years old, that every girl is a supergirl. No matter your age, your height, your weight, your color – whatever you are.”

“It’s a very hard goal. But, what I want is to tell people who are getting bullied to stand up to the bully and not let it be OK – tell a teacher, the principal, or your parents. I want people to stand up and to be confident.”

“I’ve always just worn bows. They just got bigger and better and sparklier – and then I became ‘JoJo with the bow bow,’ and it became a thing.”

“Always have a black bow, a white bow, a rainbow bow – those bows will match literally just about everything!”

“I don’t think that people don’t succeed; I think that it takes time! Everyone will have their time to shine!”

“Literally, ‘Dance Moms’ was so amazing, and I have the world to thank for that. They were so awesome – the set, the cast, the crew – it was amazing.”

“Anything can go wrong, but you can’t think about it all the time. You have to enjoy every moment.”

“I’m very proud of ‘Every Girl’s a Super Girl.’ I want all girls to know that no matter what size, color, or shape, whatever they are, that every girl is a super girl! They should be brave, confident, and have fun and enjoy every day!”

“I love doing YouTube. That’s where my heart is, and so it makes me sad when I can’t put a good, fun, energetic video out because that’s what I love to do – and that’s my passion. And that’s who I am.”

“I never really had experienced hate in school with girls and boys. What I do experience is social media, and so every day, people comment, ‘You’re fat, you’re ugly, you’re rude, you’re all this stuff,’ and I just don’t like it at all. I don’t want anyone to have to go through that.”

2. One of Jojo’s performances!

4. The glittery accessory on her head is stunning

5. This all-white outfit with silver details looks cute on her

Jojo Siwa has made a sensation and left an impact on her audience. Are you one of her fans?