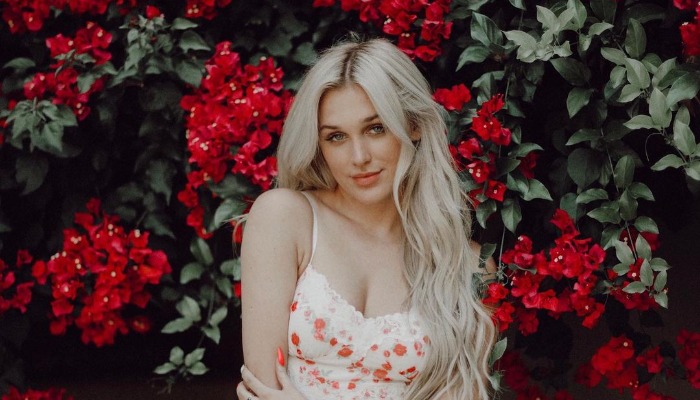 Madi Monroe has built her career as an Internet star. She makes beauty, lifestyle, and dance videos.

When she hit a huge following, Monroe joined a TikTok star group called Not a Content House with other Internet stars such Laure Kettering, Anna Shumate, and Eva Cudmore. Yet, she left it due to bad management.

Monroe was also cast as Nina for the Brat series titled Attaway General in 2020, along with other Internet stars, such as Dixie D’Amelio, Kio Cyr, and Griffin Johnson.

In September 2019, this Aquarius girl was invited to the Famous Birthdays office, along with Jaden Hossler and Griffin Johnson.

This TikTok star’s profile was featured in Seventeen magazine in September 2020.

Monroe was endorsed by a shopping brand named Wish in 2019. She also became one of the food brand Cane’s ambassadors. The major marketplace Amazon endorsed her too.

Throughout her career, Monroe has collaborated with Avani Gregg, Riley Lewis, and Amelie Zilber.

2. The high ponytail and the dress give a summer vibe

5. This mini black dress is awesome

Madi Monroe is a pretty and creative social media star. She has spread her wings to be an actress and brand ambassador for major brands.