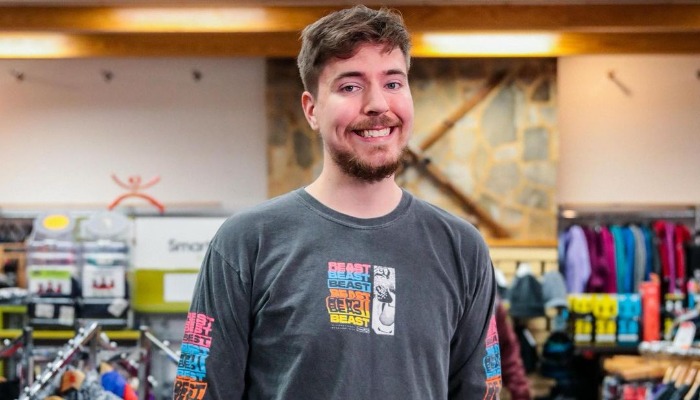 Jimmy Donaldson or known as MrBeast is an American YouTube star, TikTok star, and gamer. He was famous because of her Craziest Campire Attacker.

Jimmy Donaldson or MrBeast first created his channel when he was 13 years old. One day, he played with a hacker who attacked him.

Then, he uploaded it on YouTube with the title Craziest Vampire Attacker. The video went well and got a thousand views.

Since that, he started uploading more. He did commentary on Call of Duty and Minecraft.

As he got bored of playing games, MrBeast also creates funny videos by roasting other YouTubers’ intros. Then, he also made real-life videos like vlogs and challenges.

In June 2017, he got his first brand deal from Quit for holding a giveaway. From there, he often gives away money to people, ranging from his mother, people on the streets, and his online fans.

He signed a contract with a talent management company named Night Media. In June 2019, his channel hit 20 million subscribers.

So, he did something special and created a fundraiser named Team Trees. It raised 20 million trees before 2020. Executives Elon Musk, Jack Dorsey, and Susan Wojcicki also helped the campaign.

Throughout his career, he won several awards from the Streamy Awards for Breakout Creator, YouTuber of the Year, and Live Special.

MrBeast dated Maddy Spidell between 2019 and 2022. They pretty much keep the relationship private and he only shows her relationship with Maddy through a few videos with Maddy in it.

Since they kept their relationship private, they also didn’t have much to say when they parted ways. The fact that they no longer were dating was revealed by EJ Dickson.

MrBeast recently revealed his relationship with Thea Booysen, a Twitch star and gamer. He made the relationship public by sharing their picture together through his social media accounts.

Either MrBeast and Thea showed their lovey dovey in the social media and Thea also speaking about their relationship knowing how popular MrBeast is.

MrBeast’s net worth is around $100 million. He is known as one of the richest YouTubers in their 20s.

While his main income is from YouTube, he also makes some money from sponsorship, and endorsements.

Calculating with YouTube’s payment system, he could earn as much as $40,000 per day for each video and for a year, he could earn up to $15 million from one channel.

According to Forbes, in 2021, he made $54 million from YouTube and this amount is higher than the amount of wealthy YouTuber such as Ryan Kaji made in 2020.

MrBeast known to charges $1 million per month to be the primary sponsor in his main video page. Through this sponsorship, knowing it just from one channel, it could be assumed that he earns at least $2 million from the sponsorship.

MrBeast has his own merchandise line. In 2021, it was reported that his merch made around 2.25 million per month and $54 million in total.

“You gotta fail for the most part to learn”

“Every day is different so there is no like routine”

“I used to make a dollar a day, so I didn’t even have a microphone”

“My overaching goal in life is to make a lot of money and then before I die, give it away”

“I think on YouTube, it’s different, and people just haven’t realized it: positivity is just as clickbait as negativity”

1. He poses in front of his car

2. He was drowned in Christmas light

3. He tries to eat the biggest pizza in the world

4. MrBeast opens his own restaurant

5. This YouTuber went to his private island

MrBeast is not a mere YouTuber. He is a genuine philanthropist and entrepreneur who always goes beyond and makes people work together.