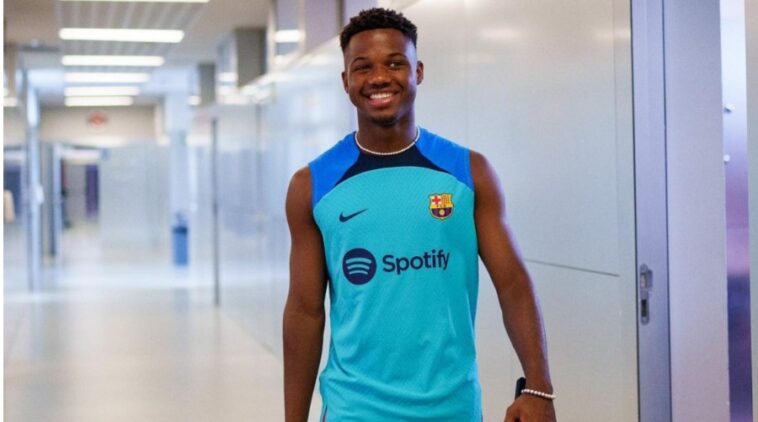 Showing his interest in football, Ansu Fati moved to Sevilla when he was six along with his family. In Sevilla, he joined Sevilla youth team.

He spent two years in Sevilla’s youth before he captured the attention of other clubs like Real Madrid and Sevilla who both want to sign him.

He makes his debut for Barcelona in the 78th minutes to replace Carlez Perez in the matches against Betis. He was the youngest person to play for Barca at the age of 16.

While born in Guinea Bissau, his Spanish citizenship allows him to represent Spanish side. He makes his international debut in October 2019 for Spain U-21 against Montenegro.

“I still have doubts over whether or not everything that’s happening is a reality… Playing with Messi is a dream.”

“Playing without a crowd sucks. You want to be a footballer because of the fans and to celebrate a goal with them.”

“I have fulfilled a dream, I thank my teammates and the coach for a new opportunity. I am very grateful for the treatment of the dressing room. They help me a lot. I’m still young.”

“After I made my debut, I stopped looking at social networks because if you believe it, your performance suffers and you are not the same.”

“The number 10 has been worn by great players such as Ronaldinho, Maradona, and Messi of course. For me it’s an honor to wear it after Leo. My family is very proud of me. I work to try and do better every day.”

“He gives me a lot of advice, he helps me a lot on the pitch and in training, but away from it too, and that makes me very happy.” –Ansu about Messi

“I want to keep improving every day, to continue to learn from my team mates because they are the best around and they are trying to help me every day,”

His injury when he was still young didn’t keep him from pursuing his dream. With his persistent, he kept improving and became the youngest player to score in La Liga.