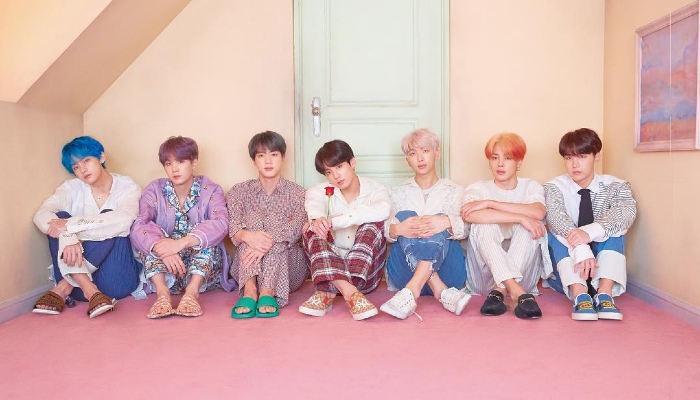 K-pop group BTS was first formed in 2010 with only 3 members: RM, Suga, and J-Hope. The 3 of them were supposed to form a hip hop group under Big Hit Entertainment.

The group was planned to have their debut in 2011 featuring songs by the like of 2AM and Lee Seung-gi.

The debut was postponed and BTS eventually went into the direction of a more traditional group instead. The group final lineup consists of RM, Suga, J-Hope, Jin, Jimin, V, and Jungkook.

The name BTS stands for Bangtan Sonyeondan. In English, it has a literal meaning of Bulletproof Boy Scouts.

It reflects the group’s aim to block out bullets of criticisms, stereotypes, and expectations that often hit young people.

As part of their new brand identity, as of July 2017 BTS also stand for Beyond the Scene. With this name, they are ready to go beyond the realities they are facing.

The 7 man group finally released their debut single album 2 Cool 4 Skool along with the lead single No More Dream on June 2013.

The release was not a major hit, selling only 24.000 copies in 2013. Even though it was not a very successful debut, critics could see the group’s potential especially with their stage presence.

BTS finally got their major breakthrough with the release of 2016 studio album Wings. It was a huge commercial success with more than 500.000 copies on first week.

On Billboard 200 chart, Wings debuted at number 26. BTS also topped the Billboard Social 50 chart that month, becoming the first Korean group to do so.

The lead single Blood Sweat & Tears also had massive success. It got a music chart all-kill in South Korea and earned BTS their first number one hit on weekly Gaon Digital Chart.

BTS reached new high of success with the release of Love Yourself series. The series began with EP Love Yourself: Her on September 2017.

They followed it up with the released of Love Yourself: Tear. The studio album is one of their most successful albums.

Over the year, BTS continues to break new records both domestically and internationally.

Both songs managed to debut at number 1 on Billboard Hot 100.

With the achievement and success they’ve had, it’s crazy to think that BTS probably hasn’t reached the height of their career. Let’s see what other records they will break over the next few years.