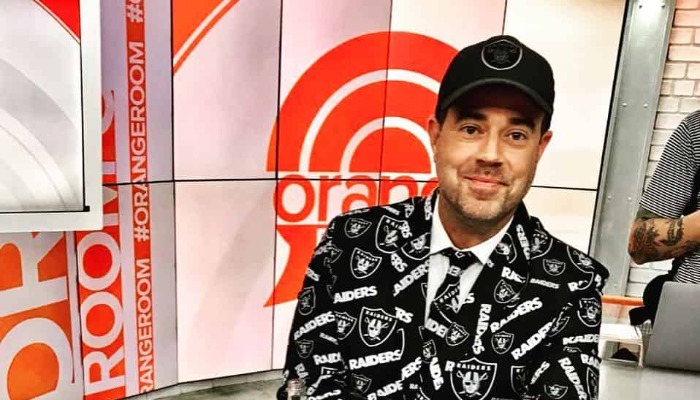 You may notice Carson Daly when he became The Voice’s host in 2011. However, his career was begun way before that.

He first came from the radio industry when Daly joined KCMJ FM with the name Kid Carson.

Then. he got the time slot on 6-10 PM when he was at KROQ Los Angeles. After that, MTV recruited her as a VJ for the channel.

He eventually gained popularity from his show Total Request Live. It was aired between 1998 to 2003.

He also hosted MTV Live. Next, he debuted in the Last Call with Carson Daly in 2002. His turning point is to become the host of The Voice, a reality music competition on NBC.

He received several awards for the Outstanding Reality-Competition Program from Emmy Awards.

As his career is under the spotlight, Carson Daly appears in some TV series, shows, and even news. Once, Daly briefly appeared in one episode of My Name is Earl

. He also hosted New Year’s Eve with Carson Daly for many years and played a small role on Dave Chappelle’s show. Then, Daly became the co-host of the Today Show.

1. This is Daly’s selfie? How about yours?

2. Although his career as a host is successful, he never leaves his favorite sport, golf.

3. He looks like a scientist. Guess how he is doing!

4. He finally gets what he deserves. Congratulations!

As a celebrity, you are not only limited in acting or music career. Just like what Carson Daly pursues, you can be a host and gain fame too!