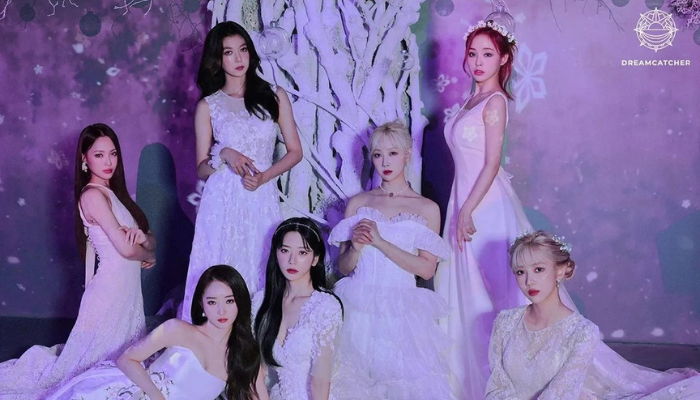 Dreamcatcher, formerly known as MINX which debuted in 2014, the MINX members contained JiU, SuA, Siyeon, Yoohyeon, and Dami, released the debut single called Why Did You Come to My Home?.

But two years after MINX debuted, their agency, Happyface Entertainment made an announcement about the re-debut plan to transform them into a new girl group and adding the new members, Gahyeon and Handong.

On 13th January 2017, the group then finally re-debuted with the new members, new concept, and new group’s name, Dreamcatcher. Every member of Dreamcatcher represents 7 different nightmares.

They also released the debut single album called Nightmare with the lead single Chase Me.

In April, they then released the next single album called Fall Asleep in the Mirror with the lead single Good Night.

Dreamcatcher’s first extended play was Prequel and was released on 27th July 2017.

Shortly, the EP got 5th place for Billboard World Albums Chart and became a winner for K-Pop Top 100 Chart for US iTunes.

In the same year, some Dreamcatcher members, Siyeon, JiU, Dami, and Yoohyeon, then joined MIXNINE, a survival show. But they left the show immediately because of the overlapping schedule.

The group then made a release of the second extended play called Escape the Era in 2018.

The release got 1st and 3rd place for Hanteo’s album chart, 3rd place on Gaon, and 1st place on Yinyuetai from China. It also got 7th place for Billboard World Albums.

In the same year, the group released the 3rd EP called Alone in the City on 20th September and the 4th EP called The End of Nightmare in February 2019.

Again, these EPs made huge achievements in the K-Pop industry.

Not only a unique girl group, but Dreamcatcher also catches everybody’s attention by its members’ boldness and amazing talents.