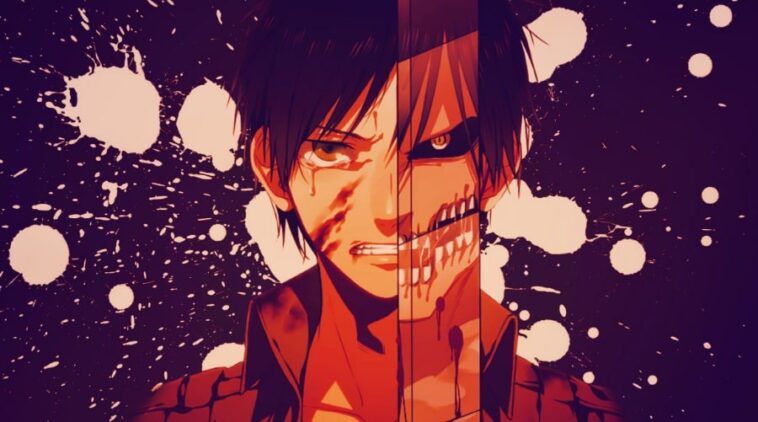 Eren Yeager is the protagonist of Attack on Titan, an anime and manga that receives massive popularity around the world.

When first introduced, Eren Yeager was a 15 years old boy living in Shiganshina District, the southernmost town of Wall Maria, the outer of Paradis Island. He has a long face with black hair and large green eyes.

His brow is straight and often seems furrowed and it makes him look angry or annoyed. His hair when he was first introduced was short, but it became long after the four-year time skip.

His clothes change due to the circumstances, but his usual attire is a long beige shirt, white trousers, a maroon sash around his waist, and brown knee-high boots.

When he changes into Titan form, his appearance drastically changes. His height increased to 15 m with long hair up to his shoulder.

His eyes become deeply sunken, with a hooked nose and mouth, jagged, that are unsuited for intelligible speech, only enough to roar and howl.

From the first moment, he is shown as a passionate and impulsive boy. He has a strong will and is willing to protect mankind.

His willingness to protect mankind makes him would do anything to reach his goal. Even later, he needs to lie or make people around him do violent acts.

“ You are all free” – Eren, before being decapitated by Mikasa.

“Ever Since I Was A Kid… Mikasa. I’ve Always Hated You.”

“We’re Born Free. All of Us. Free. Some Don’t Believe It, Some Try To Take It Away. To Hell With Them!”

“If Someone Is Willing To Take My Freedom… I Won’t Hesitate To Take Theirs.”

“How Can You Call Yourself A Soldier?”

“If you think reality is just living comfortably and following your own whims, can you seriously dare to call yourself a soldier?”

“I don’t have time to worry if it’s right or wrong, you can’t hope for a horror story with a happy ending.”

“I disposed of some dangerous beasts. Mere animals that just happened to resemble humans.”

“My head’s gotten all messed up.The Founder’s power has made it so that there’s no past or future. It all exists at once. So I had to do it…”

The popularity of Eren Yeager’s character might be unpredictable even to Isayama. At first, we could see Eren as an energetic boy who dreamt of going beyond the Walls.

As the series goes on, his personality becomes more complex, so people are often confused about which one is the villain or the hero.