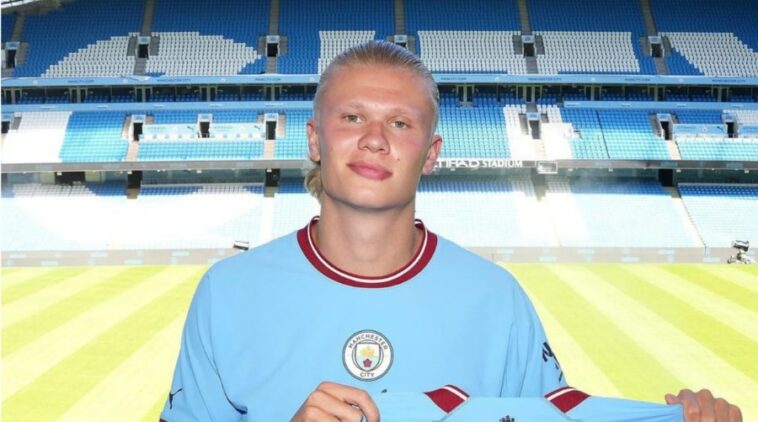 Erling Haaland began his career a long way at a young age. His adventure in football began when he was six years old when he joined the youth team Bryne FK, an indoor football academy in Norway.

When he was 15 years old, Erling Haaland joined senior club Bryne and makes his debut. Throughout his years with Bryne, he scored eighteen goals in fourteen matches and it’s sparked interest from bigger clubs.

He received several offers from bigger clubs but then decided to join Molde in 2017 and spent two seasons with Molde.

He moved from Norway to join Austrian Club Red Bull Salzburg in 2019 and his performance has kept rising since then.

On January 1, 2020, he joined German club Borussia Dortmund. His rising star status makes him keep getting offers from bigger clubs and in 2022, he completed his transfer to Manchester City.

He also played for Norway U-19 and helped the team qualify for the UEFA U-19 Championship. His rapid progress made him once again represent Norway U-20 in the 2019 FIFA U-20 World Cup against Honduras.

His striking performance makes him called up to the senior squad and makes his senior international debut on September 5, 2019 against Malta in Euro 2020 representing Norway.

“The day I do an interview over one minute will be the day I quit football.”

“Listen, I do my job on the pitch. After the match I want to hit the showers, and crack a few cold ones with the boys – not answer questions reporters already know the answers to.”

“My first girlfriend always complained about me not spending enough time with her. One day she made me choose between her and football. I miss her sometimes.”

“I have five hat-trick balls in my bed and I sleep well with them. They are my girlfriends.”

“For me, Zlatan is the biggest. He is from Scandinavia, so someone has to take over from him.

Erling Haaland’s promising talent has been shown even since he was young. Began his training at a young age, he kept rising his performance and getting offer from big club.