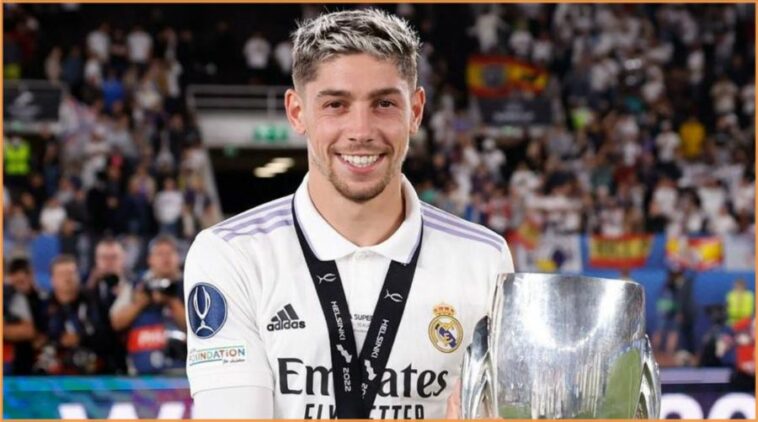 Federico Valverde started showing off his talent in football while he was still in diapers. His parents enrolled him in the Union Students babies academy in Montevideo.

When he was 3, he scored his first goal in his unofficial matches against another academy Danube. Because he’s still under 6, he can’t play in official games and was often deployed as a mascot on bigger teams.

In 2003, when he was 5, he was able to play football in official games and helped his team gain a trophy.

In 2008, he was called to join a trial with Peñarol, but he was too shy and not moving from the tree after approaching gathering session.

It’s until a coaching staff, Nestor Goncalves, approaches Federico and tells him to play, he quickly runs and joins others. Thankfully, his talent got him enrolled in Penarol youth.

He made his debut with Peñarol in 2015-16 season in a matches against Cerro. In 2016, he was transferred to Real Madrid and secured a position in their youth team until he could debut in the main team.

He made his debut for Real Madrid in a game against Real Union and was praised by coach Santiago Solari. In 2017, wanting to has experienced in another place, he was loaned to Deportivo La Coruña for a year.

He makes his return to Real Madrid in 2018 and is immediately assigned to the main team while getting praised by coach Julen Lopetegui.

He lent his impressive skills not only to his club but also to his nation. He made his international debut for Uruguay in 2017 and also scored in his first international matches.

He was also listed as part of Uruguay’s team for the 2018 World Cup in Russia.

“I am a very quiet person. My life hasn’t changed much. I find happiness from giving everything to my son. Everyone is crazy about him that I have fallen into the background but the important thing is that he is well.”

“Zidane talks to you as if he was just a friend of yours. Every word he says you need to remember it because he’s not only a coach, he’s a world legend.”

“My role is to run as much as I can, my desire is to run until I can’t run anymore. I’ll keep running until my legs burst, and if I can score much better.”

“We compete but there are those good vibes that help you grow. When you play they go out of their way to give you support and good advice.”

“Nowadays, it’s not enough just to leave it to the forwards to do all they can to score. We need to attack and defend and if we can help them out by scoring, then that’s welcome.”

“Our job is to do our bit so that Real Madrid win.”

Showing his desire for football since he was a baby and working through it until he was in European clubs was the result of his hard work and talent combined.