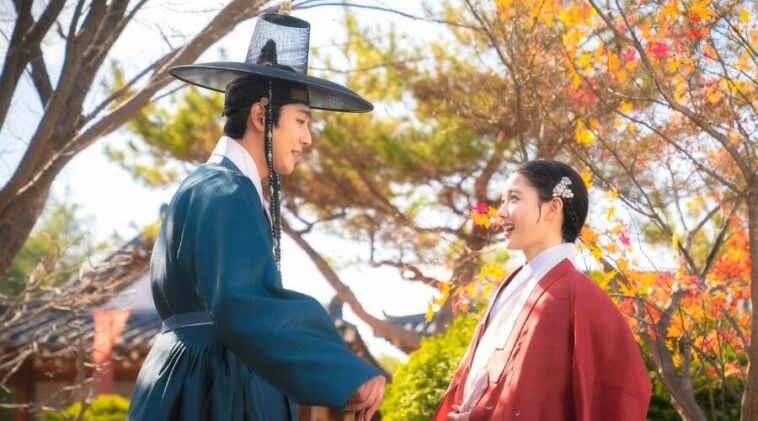 Lovers of the Red Sky or also can be called Red Sky, starting airing August 30, 2021 on SBS

Originally, the idea behind this drama is from the Hong Cheon Ki, a novel which is written by South Korean novelist, Jung Eun Gwol. Hong Cheon Ki herself is actually a Korean historical figure.

This Korean Drama has two lead actors, Kim You Jung as the female lead and Ahn Hyo Seop as the male lead.

The schedule of Lovers of the Red Sky is on every Monday and Tuesday at 22:00 KST and replaces the previous SBS drama, Racket Boys.

Synopsis of Lovers of the Red Sky

Cheon Ki is a genius painter in the Joseon era. Because of her amazing talent in painting, she was chosen by Dohwaseo to be the first female painter.

Not only has amazing painting talent, but Cheon Ki also owns a dazzling appearance and personality.

Someday, Cheon Ki started to meet someone who changes her life, Ha Ram.

Ha Ram is a Seowoongwan’s officer who has a responsibility in astronomy, meteorology, geography, and art of divination field. But unfortunately, he is blind because of a past accident in her childhood.

A Joseon’s grand painter was born blind but eventually, she could have sight because of the miracle of God.

An astrologer with a red blind eye and survive the life by Demon King’s power.

A free-spirit person who really stands for a romantic life, but actually he feels the loneliness inside his soul.

A confident and powerful person that has the vision to be the king of Joseon.

Trailer of Lovers of the Red Sky

korean dramalovers of the red sky