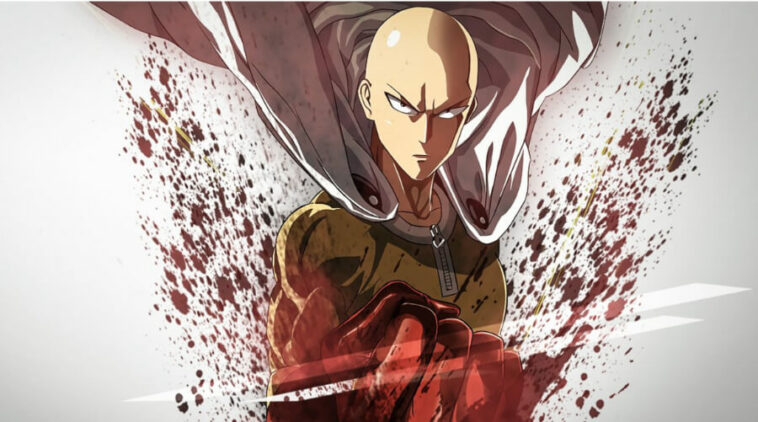 Saitama is the protagonist of the anime and manga One Punch Man. For those who are familiar with One Punch Man, the name Bald Cape must become the name we hear often, as it is Saitama’s nickname.

Written by One and illustrated by Yusuke Murata, the webcomic was first published in 2009 and years later, the series got an anime adaptation.

Saitama is going around beating his opponent wearing a yellow one-piece jumpsuit with a short zipper at the collar combined with a black belt with a round golden buckle at its center.

He also wears a red glove up to his sleeve. His boat has the same color as his glove.

One that became the iconic costume of Saitama was his white cape that was fastened to his shoulder with a round button.

Though he was drawn as a bald hero, he used to have short black hair, but eventually, he lost it due to his regimen of training as a hero.

Saitama is a thin but well-built man. Usually, we saw him in a simplistic drawn style with an elliptical head and simple facial features.

There was a time when he had drawn with a serious style with sharp facial features, fearsome eyes and chiseled musculature.

As the drawn style changes, his posture also changes from a slack posture and sloping shoulders to a straightened posture and squared shoulders.

He might look average because nothing remarkable about him. He used to be a salaryman who didn’t have any interest in anything in particular.

When he finally becomes a hero, his great power makes him become indifferent because he can beat his opponent without much struggle.

He doesn’t feel any challenge when he fights. It even makes him suffer a self-imposed existential crisis.

His indifference also applies to his daily life. He doesn’t take his work seriously, and rather than cooking for himself, he prefers to eat at the food stalls.

One of his characteristics that becomes a joke by other people is his inability to remember someone’s name and face and sometimes pronounce someone’s name wrong.

But even though his inability to remember someone’s face and name makes fun by others, he rarely shows a reaction. The only insult that can get to him is when people mention his baldness.

“Don’t you ever go around stealing peoples French fries again!.”

“Do you honestly think you won’t get any stronger for the rest of your life? Instead of sitting around frustrated, it’s better to keep moving forward. I’m going now. Today is a special day in case you didn’t know. The market is selling veggies at 30% off.” – Saitama to Glasses.

“If the Heroes run and hide, who will stay and fight?”

“Instead of sitting around frustrated, it’s better to keep on moving forward.”

“Having overwhelming power is… boring as hell.” – Saitama to Marugori

“You won’t survive. You don’t get what hero means. There are a lot of incredibly strong bad guys in the world. Those who oppose them are called heroes. Even if they are alone. You, who gathers weaker subordinates to feel strong, won’t make it. At this rate, you are gonna cry sooner or later. When a monster stronger than you shows up, none of your subordinates will save you. Factions? Newbie crushing? Keeping your ranks? They have nothing to do with anything! Don’t look down on heroes, you moron!” – Saitama to Fubuki.

“If you really want to be strong… Stop caring about what your surrounding thinks of you!”

“I’m not saying I need fans, but it would be nice if someone noticed what I’ve been doing.”

“If you got something to say, show your face! I’ll still punch you out, though.” – Saitama referring to God.

“I never could have imagined that being a hero would be so lonely…” – Saitama to King.

“Let me make one thing clear! I’m not working as a hero because I want you morons to admire me! I do it because I want to!” Saitama when facing an opposing crowd.

“There are so many extremely powerful villains in this world. A hero is someone who takes on those villains. Even if they’re all alone.”

“In exchange for gaining strength, have I lost something more important as a human being? Emotions used to swirl within me when I fought. Fear, impatience, anger… But now… Day after day, after one punch I go home unharmed and wash my gloves.” – Saitama to Marugori

“All humans are weak creatures. It is how these weak creatures fight and grow, that they eventually become strong. If you are weak, don’t despair. Fight!.

Saitama might be the most powerful hero in One Punch Man universe, but this immense amount of power sometimes brings Saitama to boredom whenever he is against his opponent.

So sometimes he likes to reasoning with his opponent about their motive before throwing his remarkable one-punch.

Just like his words to the vaccine man, “I’m just a guy who’s a hero for fun” Saitama didn’t regard his work and hero activities as something serious.