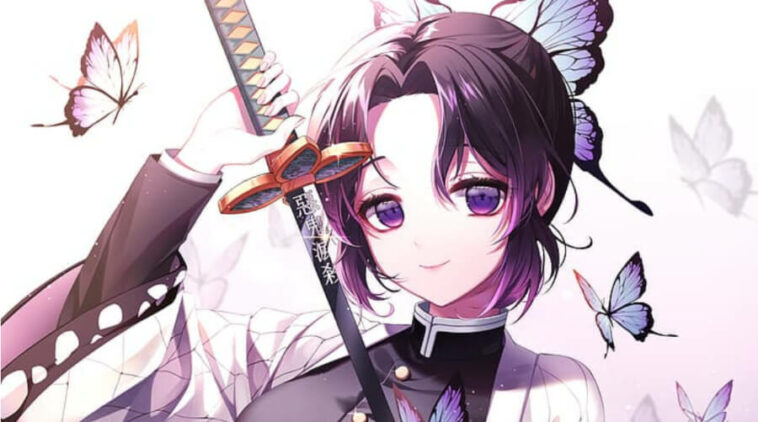 Shinobu Kocho is one of the female protagonist characters from the Demon Slayer: Kimetsu no Yaiba.

She is the younger sister of Kanae Kocho and has an adopted sister named Kanao Tsuyuri.

She and her sister joined the Demon Slayer Corps to protect others from having the same fate as her, namely her parents being killed by demons.

Shinobu is one of the less powerful characters compared to other characters in the anime. However, she has the ability to create deadly poisons to make up for this shortcoming.

All the medicines and poisons he created, were able to kill the demons easily. No wonder, he is famous as an anime character who is an expert in drugs and poisons.

She has a petite body with black to purple colored hair. Just like her hair, her beautiful eyes are also purple.

“Yes, I’m angry, Tanjiro. I’ve always been angry. My parents were killed. My older sister was killed. And all my Tsuguko except Kanao were killed. If demons hadn’t murdered those girls’ families, they’d be living happily with them right now. It really makes me furious!”

“Humans and demons, we both should get along together”.

“I’m the only slayer who cannot cut off demon’s head in Hashira, but I’m kind of a great person who made poisons to kill demons”.

“Tanjiro please do all that you can. Please find a way to protect Nezuko until the end. Knowing that you’re working so hard in my place reassures me to no end. I can rest easy now”.

“Deep down in the innermost depths of my body. There’s a revulsion that I can’t fight. I’m sure the other Hashira feel something similar, as well”.

“You’ll receive the penalty you deserve and be reborn. that way, you and I can become friends”.

“My dream that we can become friends with the demons. I’m quite sure you can accomplish that!”.

“If there’s a way not to kill these pitiful demons. I have to keep trying to come up with it. Without ever extinguishing the smile that my sister said she loved”.

“Oh, excuse me. You are already dead and cannot hear me. I totally forgot about it”.

“This is why everyone hates you”.

Although Shinobu Kocho is a woman with a weak body, she has a high spirit to destroy the demons after the death of her elder sister.