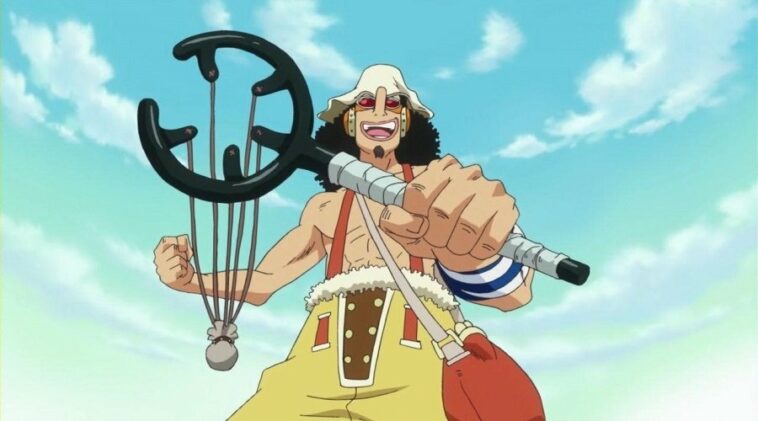 Usopp, who is also known by King of Sniper, is one of the protagonists in the manga and anime One Piece. He is one of the crew of Straw Hat Pirates who are led by the main protagonist Luffy.

Usopp’s trademark appearance is his long nose. He has black curly hair in medium length. His face resembles of his father, except for his nose, which he got from his mother.

For almost the entire story, he wore the same outfit. He wore a brown overall with a white sash without a shirt underneath.

He also wore a green plaid bandana accompanied by a blue and white stripes armband on his left arm, and special sniper goggles.

Sometimes, his clothes change, especially his shirt. He once wore a murky green shirt underneath his brown overalls.

His clothes also changed to a yellow zip-up coach jacket along with a red towel around his shoulders.

Usopp is known for his lies. He often lies to save himself and enjoys telling tall tales. He is the comic relief in the crew and also the weakest member.

Though he is weakest, he is not selfish, and is compassionate. He strives to become a great pirate and works hard to keep the crew safe.

“A dumbass is still a dumbass.”

“Man or child, strong or weak, none of those matter once you are out at sea.”

“I can kick just as much butt as anyone when I want to!”

“I will fight! It’s not a lie, but to become a true brave warrior of the sea!”

“Serves you right! You’ve underestimated me!”

“D-don’t mess around! This man, Usopp, will accept your challenge!”

“I’m the sniper for the Straw Hat Pirates! Don’t underestimate me!”

“Yeeeaaah, everyone! Nice work! but you Zoro you did nothing!”

“There comes a time when a man has to stand and fight! This is the time when his friend’s dreams are laughed at. Luffy wont die… I know he’ll be the pirate king one day…and I won’t let you laugh at that!”

Usopp might be the weakest member of the crew, and sometimes he lets his cowardice get ahead of himself.

But he can overcome it and face his fears for the sake of his friends, even to save people he barely knows.