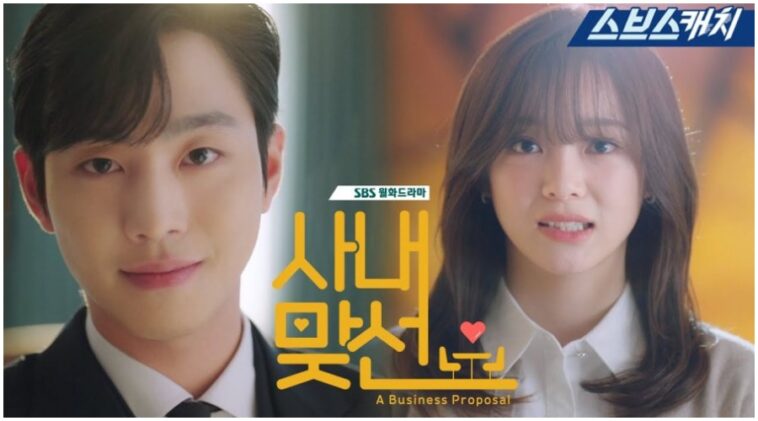 A Business Proposal, a drama webtoon adaptation has been released on SBS channel. This drama is played by Ahn Hyo Seop. Kim Se Jeong, Kim Min Kyu, and Seol In Ah.

Meanwhile, Kim Se Jeong has appeared in the drama The Uncanny Counter (2021) and I Wanna Hear Your Song (2019).

Not only that, but Kim Min Kyu also joined this drama after his previous actions in the Snowdrop (2022).

Synopsis of A Business proposal

After they meet, Shin Ha Ri who uses her friend’s identity called by the CEO to marry with him. Will Ha Ri accept or deny it?

An independent woman and a hard worker in a company. One day, she tries to confess her feelings to her best friend, but he refuses it cause he has a girlfriend.

After that confession session, she feels broken and accepted her friend’s offer to replace the blind date session by using her friend’s identity.

Unexpectedly, her partner is the CEO whom she working for and on the other days, that man is asking Ha Ri to married with him.

He is a workaholic CEO who tries to reject his grandfather’s offer for coming to the blind date that he has arranged.

Tae Mu finally agrees for joining the blind date and will marry the next woman that she meet in the blind date to stop his grandfather’s next action.

He is an orphanage who gets life sponsored by the company under Kang Tae Mu’s family group. He also grew together with Tae Mu and also became a best friend after that.

Many years later, he became a researcher at Go Food’s Food Development and falls in love with a girl from a wealthy family named Jin Young Seo

She is Ha Ri’s best friend who offers to replace her in the blind date session because she doesn’t believe in arranged love.

Trailer of A Business Proposal