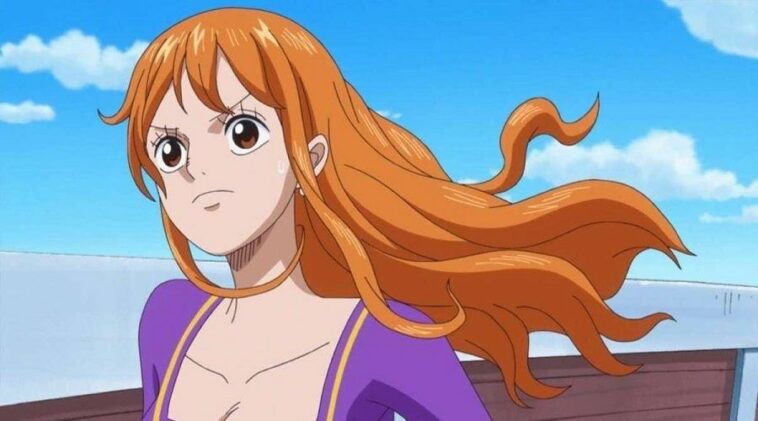 With average height, she had a slim body with orange hair and brown eyes. She has a tattoo on her left shoulder that represents mikan and a tattoo of pinwheels.

When first introduced, she had short hair, but then throughout the story, the hair style changed several times. Her fashion also frequently changes.

She wears Log Pose on her left wrist to help her navigate and a gold bracelet that is a gift from Nojiko. She has trademark shoes, which are orange high heels gladiator sandals.

She is undoubtedly smart, one of the smartest in Straw Hat Pirates, but at first she despised all pirates. Bu the view changes after she meets Luffy.

She didn’t believe in myths and legends as well as Devil Fruits, which changed over the time she spent time together with Straw Hat crew.

“Oh, what a pity! I’m more than a cute navigator.”

“Thanks! As thanks you’ll receive help from someone cute and strong: me!”

“Luffy says he will be the “Pirate King”, I can’t be satisfied with being an ordinary navigator.”

“Luffy’s gonna become the Pirate King! Because he has an excellent navigator with him!”

“Life is like a pencil that will surely run out, but will leave the beautiful writing of life.”

“Why? The work that the marines should be doing now…there are many things that you have to take care of. Don’t know that Arlong has killed many people and destroyed many villages? Under his control, everyone was treated like a slave! And you didn’t do a single thing about that!! And now you just want to find the treasure of one thief? Is this a real government?”

“Everyone is expecting help from you, but you come here and don’t think about doing anything to help those people?”

“I’d served you to earn the treasure to save my village! But that’s over now! I’ll get my freedom to defeat you!”

“Everyone’s weak when they hesitate.”

Nami holds an important role in Straw Hat Pirate and is one of Luffy’s trusted people.

While she might not hold power from Devil Fruit, but she is strong and smart enough to fights, her opponents thought she mostly choose not to fights.